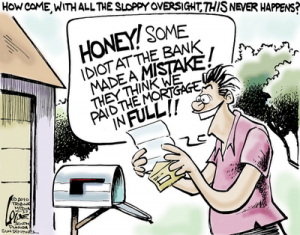 Last week’s decision by the Fed to start another round of Quantitative Easing was met with only one dissenting vote by the Federal Open Market Committee.  That does not mean everybody in the rest of the world thinks this is a good idea.  Any country holding dollars is faced with a decrease in buying power.  Some of the most powerful members of the G-20 are highly critical of the Fed’s money printing.  Germany, Brazil and China all made negative comments about the Fed’s latest round of QE in a Bloomberg article over the weekend.  It reported, “It’s our problem as well if the U.S. is no longer certain that the old recipes don’t work anymore,” German Finance Minister Wolfgang Schaeuble said yesterday in Berlin. The Fed’s injection of $600 billion was “clueless” and won’t revive growth, he said.  Brazil’s central bank president, Henrique Meirelles, said “excess liquidity” in the U.S. economy is creating “risks for everyone.” In China, Vice Foreign Minister Cui Tiankai said “many countries are worried about the impact of the policy on their economies.” He also said the U.S. “owes us some explanation on their decision on quantitative easing.”  (Click here for the complete Bloomberg article.)

Still, Fed Chief Bernanke is unwavering in the decision to print money to revive the economy.  The same Bloomberg article quoted Mr. Bernanke, “Our first objective, the first goal that we have, is to meet our mandate to get price stability and maximum employment in the United States . . . A strong U.S. economy, a recovering economy, is critical not just for Americans but it’s also critical for the global recovery.”  The rest of the world is clearly not buying the idea that the Fed is saving the world economy.  So what would make the Fed so defiant in the face of such global criticism?  I think the Fed is really worried about mortgage interest rates and declining home prices.  I bring out my favorite updated chart of mortgage resets for adjustable rate mortgages.   The chart below shows a tsunami of resets that will not crescendo until late 2012.   Study it for yourself: 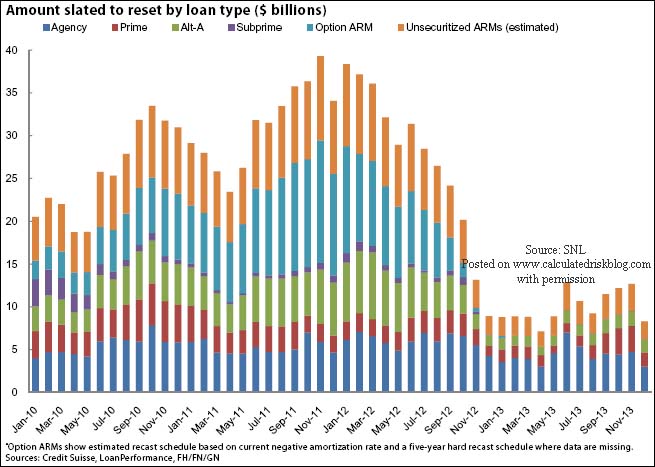 Again, “ARM rates hit new all-time record lows!”  That is precisely what the Fed wants.    Lower rates are what anyone with an adjustable rate mortgage needs.  Lower rates mean lower monthly payments, and that will hopefully keep people in their homes.  And, if homeowners continue paying their mortgages, that will keep trillions of dollars of mortgage-backed securities from becoming even more devalued.  So, the Fed has chosen to support housing prices and let the dollar be damned by printing money.

John Williams at Shadowstats.com says the Fed’s policies are not helping the economy get better.  The 151,000 jobs that were created in October “largely were the result of seasonal-adjustment gimmicks,” according to Williams’ latest report (published last Friday).  If unemployment was computed the way Bureau of Labor Statistics did it before 1994, it would actually be a stunning 22.5% (also, according to shadowstats.com).

The economy is not getting better–just the opposite, according to Williams, “As the double-dip recession and the federal deficit and related Treasury funding horrors get worse — irrespective of today’s (November 5th) happy report on payroll employment — the Fed’s monetization of Treasury debt will be increased out of necessity, as part of an ongoing effort at systemic salvation.”

The Fed wants to support housing prices and, thus, support mortgage bonds.  If those two legs of the housing market are knocked out, the whole economy could come crashing down.  In my mind, that is clearly the Fed’s biggest fear.