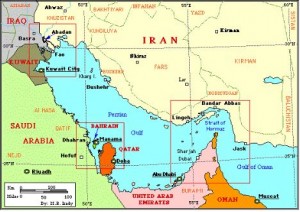 Iran is threatening to shut down the Strait of Hormuz if more sanctions are installed against it.  Tensions are mounting between the U.S. and other nations as Iran continues to develop a nuclear program.  Most recently, it was reported Iran made its first nuclear fuel rod that it claims is for the peaceful production of energy.  Iran has also made threats against the U.S. Navy and said that it will take action if the aircraft carrier USS Stennis came back into the Persian Gulf after departing at the end of December.  The Pentagon said, today, it will ignore the threats and continue to operate as usual.  Can the Iranians shut down the Strait that 40% of the world’s oil moves through?  Former Secretary of Defense William Cohen says that is “unlikely to happen.”  But, what if only part of the world’s oil is stopped?  What if China doesn’t adhere to new sanctions on Iran’s oil?  China is a major importer of Iranian oil.  Will there be a wider war?  Will the fragile world economy spiral down into a worldwide depression?  The Strait of Hormuz is only about 30 miles wide at its narrowest point.  Does anyone believe an attempt to shut it down will have no effect on oil prices?  How long will the Iranians try to stop or slow traffic? Days?  Weeks?  Months?  Years?  This is the black swan of black swans, and we could all wake up one morning wishing we filled up the car the night before.  Here’s more on the story from these two links: