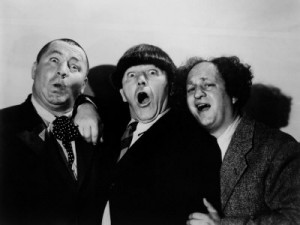 From the movie “Three Dumb Clucks”

I watched in amazement today at the Senate Hearing on the collapse of MF Global about 6 weeks ago.  The three top executives testified about what they knew and when they knew it.  CEO Jon Corzine, COO Bradley Abelow and CFO Henri Steenkamp all sat there and, essentially, said none of them knew where $1.2 billion of segregated customer money went.  It might as well have been Moe, Larry and Curly testifying.   As I watched these three, the basic theme was none of these guys knew what was going on in the company they were paid to run.  I guess they have proof they didn’t know what they were doing because the company they were running went bankrupt.   Corzine said repeatedly, “I never gave any instruction to anyone at MF Global to misuse customer funds.”  If that is not a well-rehearsed legal answer, I don’t know what is.

Other legal words and phrases I heard from the three MF Global executives include: “To the best of my recollection, to the best of my knowledge, I do not recall, and no reason to believe,” just to name a few.    When COO Bradley Abelow was asked the simple question of where did the money go?  Mr. Abelow said, “I do know what happened, and I am awaiting results of the investigation to inform us all.”  What?  So we are awaiting the results of an investigation to find out what these three stooges were paid to know?

The CFO testified that when he knew the company was going down, the regulators were called at around 2 am.  My question is what number did they call?  Was someone at the offices of the Chicago Mercantile Exchange (CME) or the Commodity Futures Trading Commission (CFTC)?  Why did these guys have a phone number of the CFTC and CME that they could call at 2 am?  Did they know the company was going down, or are they that well acquainted that they have a private number that could be called in the middle of the night?  Are the CME and CFTC giving 24/7 service?

My next question is about how margin calls were being paid.  All three executives confirmed that MF Global was borrowing money to pay margin calls.  Corzine said his firm was using “. . . draws against our liquidity lines at the banks.”   So, the firm was using borrowed money to pay operating costs?  I am not an expert, but wouldn’t that be a red flag to the CFTC and CME?  To me, that’s like using a draw against your credit cards to make your house payment.  If you are doing that, it probably will not be long before you default.

I find it absurd that Jon Corzine, a former top executive at Goldman Sachs, a former U.S. Senator and former Governor of New Jersey, is that stupid or that much in the dark about the company he ran for 19 months.  The only thing that was missing from the testimony today was Moe slapping Larry and Curly for the answers they were giving.  (For more on today’s Senate testimony, click here.)