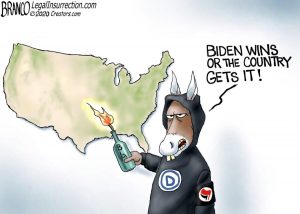 All this talk about the November 2020 Election being close is pure lunacy.  My prediction is it’s going to be a blowout for President Trump in November.  Here’s why.  The 80 million mail-in ballots and attempted voter fraud that is planned by Democrats is just too much to pull off on this short of notice.  We all know the voter fraud is coming, and it is simply not going to work.  Much of it is going be detected and thwarted.  The violence is going to go on, but that is not going to work either and has already backfired on Democrats that let their cities burn down.  Arrests are coming, and don’t think they are not.  Biden is a wild card, but only bad performances are coming in his declining state until Election Day.  The real question is how bad will he get, and will he even be able to debate President Trump?  Get real people.  Dems are desperate, and desperate people do stupid things that don’t usually work out well.

To add insult to an already disheveled and desperate Dem Party, the “racist” Trump (sarcasm) has been gaining support with registered black voters.  In one poll taken during the RNC convention, Trump’s support with black voters was up to 24%.  How many will vote for him in 2020?  Way more than the 8% that voted for him in 2016, that is for sure.  I suspect that number could double, and that alone is game, set and match.  That said, how many of the nearly 40% of independent voters do you think Democrats will get with Black Lives Matter and Antifa rioters supported by Joe Biden and his fellow Democrats?  I say another blowout for Trump and the pollsters won’t touch these folk because I think they know how lopsided it really is.

Another 884,000 filed for first time unemployment benefits last week.  All you can say for good news is it is less than 1 million for the second week in a row.  In the last 25 weeks of Corona hell, nearly 60 million people have filed for unemployment, and that is not a sign the economy is getting much better.  I’ll tell you what’s coming your way, and it ain’t pretty.

Money manager and economist Michael Pento will be the guest for the Saturday Night Post.  He has some stunning economic numbers that show the direction of the economy in the next several months.  Let’s just say this is not a good time to take on a lot of debt.