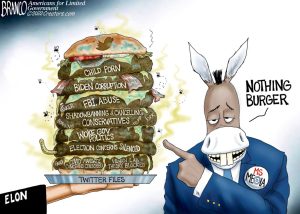 President Trump had a big announcement on his Truth Social platform, but the Lying Legacy Media (LLM) will never show you this because it about the LLM colluding with the government to censor “We the People.”  In short, they suppress the truth about all sorts of things.  From the legitimacy of the Hunter Biden laptop to the dangers of the CV19 injections, these are some of the truths they censored.  Trump says, “If we don’t have free speech, we don’t have a free country.” He’s right.  This is a big part of Trump’s 2024 campaign platform.

The CV19 vax lies keep getting exposed with each new “Died Suddenly” report and new data showing the vax was a deadly and dangerous fraud from the very beginning.  There is no stopping what is coming.  The rage from the millions who are injured and families whose loved ones have died are not going to stop stacking up.  Now, more and more, there are calls for prosecutions of all the people who pushed these clot shots.  The truth about the CV19 shots was also censored by the government and Big Tech.  The so-called “Twitter Files” are exposing the criminals who hid the truth.  Much more is coming out.  Count on it.

The Fed is still fighting inflation by raising a key interest rate by another .5%.  Is raising rates going to stop inflation?  Not according to economist John Williams of ShadowStats.com.  Williams says surging inflation is caused by extreme money printing, and with a fresh $1.65 trillion just passed in Congress, don’t expect inflation to retreat.  It’s just the opposite, according to Williams.  Brace yourself.

Join Greg Hunter od USAWatchdog.com as he talks about these stories and more in the Weekly News Wrap-Up for 12.16.22.

(Video will play when it finishes processing at Rumble.)

World renowned economic and geopolitical cycle expert Martin Armstrong will be back for an update on the economy, war, social unrest and a few predictions for 2023.