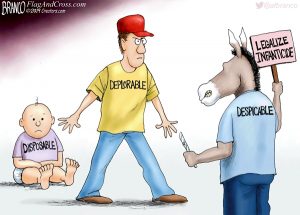 President Trump said he “walked away” from signing a deal on denuclearizing the Korean Peninsula. He said he would rather have “no deal than a bad deal.” He did get a commitment from North Korea to not test nukes and not do any further missile testing. No timeline was given for new talks.

The Senate could not get the 60 votes needed to pass legislation to protect the life of a baby born during an abortion. 44 Democrat Senators voted against legislation that would require doctors to give same care to infants who survived abortion that any other baby would get. How are these Senators going to run on killing babies in 2020?

One big theme of the economy is debt and lots of it. Do you ever hear of any politician in the world talking about paying any of this massive debt back? Of course not, and that should scare the heck out of you.

Catherine Austin Fitts from Solari.com will be our guest on the Early Sunday Release to talk about massive U.S. debt and Constitution destroying secret budgets.

To buy a copy of The New Testament of “That Which is Perfect” click here.

Update on Rob Kirby:  I called him and he said he is out of intensive care and doing better, but he is going to be in the hospital for a while yet.  He thanked everybody for the prayers!!!!!