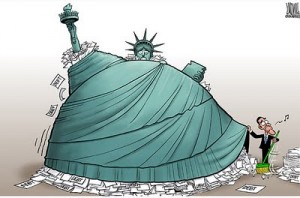 There are two big debt crises going on now in the world.  First, in Washington D.C., the debt ceiling talks have gotten ugly and have hit an impasse.  I don’t know if Democrats and Republicans will get a deal done in time before the default deadline of August 2nd.  I do know if a deal is not done, Fed Chief Bernanke predicts “calamity” and “chaos” if the U.S. defaults on its debt.  Meanwhile, Europe continues to struggle with its sovereign debt problems with several countries.  The latest bomb to explode is Italy, and this is the biggest of all the so-called PIIGS (Portugal, Ireland Italy, Greece,Spain).  This is unprecedented in human history, and there is reason to worry.  Gold is hitting all-time highs in most currencies around the globe.  This is no mystery given all the money printing going on to fix the crises on both sides of the pond.  All this and a lot more on this week’s Weekly News Wrap-Up.  Enjoy the newscast: