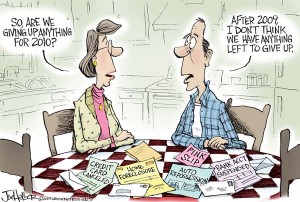 Friday, the Bureau of Labor Statistics released its latest unemployment numbers.  The BLS said, “Nonfarm payroll employment edged down (-85,000) in December, and the unemployment rate was unchanged at 10.0 percent.”  Shadow Government Statistics founder, John Williams, looked at the same data the government did and said, “…payrolls likely declined by about 500,000.”  That is nearly five times worse unemployment than the government reported last Friday.  How can this be?  According to the latest report from SGS, part of the reason is due to “BLS assumes jobs lost by companies going out of business are offset by start-up enterprises.”  What?  The BLS assumes just as many jobs lost are being magically created with new start-up enterprises?   I know I just quoted SGS in my last post, but John Williams is one of the few economists that process raw financial data without the government gimmicks and distortions.  In most cases, these “gimmicks” make things look better than they really are, and that gives you a false read on the economy.   By the way, if you calculate the unemployment rate the way BLS did it before 1994, the real unemployment rate according to SGS jumped to 21.9%.

Think about what just happened with this latest unemployment report.  The country has spent or committed trillions of dollars fighting the financial crisis, and we are still losing jobs!  The economy should be taking off like a rocket but, instead, it is actually getting worse.  I don’t want to be a doom and gloom site, but the facts are what they are.   I want people to be armed with knowledge so they won’t make any bad choices with “distorted” information.  The only way to prepare and protect you and your family for what is coming is to have good solid analysis.  I do not get any compensation from Shadow Government Statistics.  I use John Williams as a source because he has been one of the most accurate economists in the country.  (For more info on SGS click here.)

The most disturbing thing I see when “distorted” numbers are released is the total acceptance by the mainstream media of government information.  When I was at ABC and CNN, government data would go on the air unquestioned and accepted as totally accurate.  Isn’t the media supposed to question the government?  Why do they allow the government to use gimmicks to make the economy look better than it  really is?  It is a sad comment on the state of journalism in America.   I say the truth is always appropriate, even if it’s bad news.