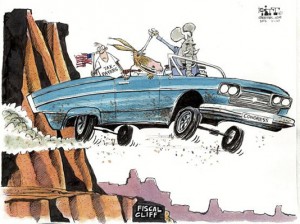 The two big issues, this week, are the U.S. debt deal and the Middle East.  The debt deal that everyone thinks was in the bag looks like it is nowhere near a done deal.  It all comes down to which parties’ base will be hurt the most.  For the Republicans, it’s tax increases.  In this case, they want to close loopholes and raise a trillion bucks over 10 years.  It’s not a lot of money, but I guess it’s a start.  Even things like the mortgage interest deduction are on the table.  They call this revenue, but it is really confiscation.  This is where it gets difficult.  Nobody wants to pay more in taxes.  In this case, realtors say it will hurt housing.  On the other side, it’s cuts to social programs.  The Democrats, so far, haven’t put together significant cuts to anything–so much for the “balanced approach.”  Neither party will utter a word about the ongoing banker bailouts that are open-ended at a rate of $40 billion per month—surprise!!!  If we do hit this so-called “Fiscal Cliff” and there is no real deal, expect the Fed to go on a money printing rampage.  Even the Fed does not want to see mandatory spending cuts and tax increases on the first day of 2013.

Also, expect another cut to the U.S. credit rating, and that means interest rates could spike.  It is hard working yourself out of debt, but with the political environment in Washington D.C., it’s almost impossible.  It looks to me like both parties are more worried about getting the blame for the “Fiscal Cliff” than avoiding it.  Oh, and by the way, the U.S. will hit the $16.4 trillion debt ceiling sometime in the last week of December.  Now, that’s a real “Fiscal Cliff.”

The Middle East is another mess, and this mess could spark war.  Remember the cease-fire that was reached last week between the Israelis and Hamas?  It has been widely reported that Hamas leaders admit to Iran re-arming them.  That does not sound like to me that these two sides are headed for the peace table.  It is only a matter of time before fighting breaks out again.  Now, the U.N. has voted to make Palestine one step closer to becoming a country.  The U.N. voted overwhelmingly to grant Palestinians non-member observer state status.  It doesn’t make them a country, but it does upgrade them in the eyes of most of the world.  The U.S. and Israel voted “NO” along with just seven other countries.  The U.S. says it will make negotiations between Israel and the Palestinians much harder.  The Palestinians scored a very big victory on the world stage.

And remember Egypt’s historic elections?  That country is in upheaval, once again, because of a power grab by new President Mohammad Morsi.  Tens of thousands have hit the streets to protest Morsi wanting to become an elected dictator.  Those folks want a Constitution with checks and balances much like we have here in the U.S.  Can you blame them?

Finally, Warren Buffett wants Jamie Dimon as the new Treasury Secretary.  Buffett (whose Berkshire Hathaway was basically bailed out by taxpayers) wants another bailout crony put in office.  I wrote a post, this week, that chronicled the missteps and alleged fraud by JPMorgan Chase in which Dimon is CEO.  Just in the last year alone, the bank has paid hundreds of millions of dollars to settle fraud charges with the SEC.  It is still in the middle of the enormous LIBOR interest rate rigging scandal (along with about a dozen other global banks) and lost billions in risky trades at its London office.  Remember, JP Morgan has FDIC insurance, and Mr. Dimon appeared not to know much about it until the losses popped up.  This is the guy the U.S. should have running the Treasury Department?  I don’t get it.

Join Greg Hunter for analysis of these stories and more in the Weekly News Wrap-Up.