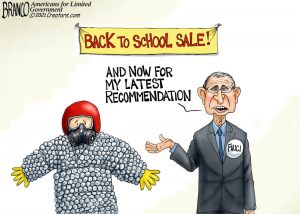 What ever happened to the door knocking campaign from the Biden Administration to get the unvaxed, vaxed?  It appears to be replaced with a tyrannical panicked push to get everyone vaxed right now.  Kids, pregnant women, military and anyone unvaxed.  Get vaxed or get fired.  Legal cases are forming every day, and will religious exemptions save the day?  Pay no mind to science or constitutional rights.  Never mind the silly Nuremberg Code of 1947 that came out of the forced science experiments by Nazis doctors, they hanged by the way.  Who cares about the well documented volumes of science on natural immunity?  Half the country already has natural immunity according to top nationally recognized doctors.  So, for half the country, a CV19 vaccine is not needed.  “Get the damn vaccine” is the new narrative by evil vaxers.  According to people like Dr. Paul Craig Roberts, this panicked push is because the Covid scam is unraveling at high speed.

The dark Covid powers withheld cures like HCQ and Ivermectin and are still withholding them.  They are still letting people die so vax makers can continue making huge profits.  The so-called CV19 vaccine is creating the variants according to one Nobel Prize winning doctor.  Maybe this is why they are already rushing out a “booster.”  You don’t need a booster if you have natural immunity.  Natural immunity is much safer than getting an experimental mRNA gene therapy drug trial.  There is talk of the FDA approving the Jab as safe and effective when company documents and vax reporting data says they are not.  Who cares about facts and data, vax on and get that booster.

The Supreme Court ruled against the CDC and its moratorium on evictions for renters and homeowners not paying their bills.  That did not stop the all-knowing and all-powerful CDC from extending the eviction moratorium until October.  It was a tyrannical move on the Biden Administration’s part, but what’s the rule of law and the Supreme Court anyway?  A lawless economy is a dangerous economy.  Cut back on risk.

Join Greg Hunter of USAWatchdog.com as he talks about these stories and more in the Weekly News Wrap-Up for 8.6.21.

My Pillow CEO Mike Lindell will be the guest for the Saturday Night Post.  Lindell will talk about his ongoing efforts to fight election fraud, his dust up with FOX and his ongoing struggles with the cancel culture that just cannot keep Lindell or My Pillow down.