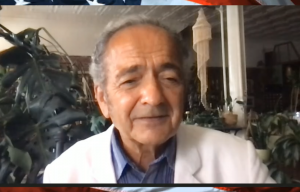 Renowned trends researcher and publisher of “The Trends Journal,” Gerald Celente, boldly predicted back in April, “We are going to start seeing a big anti-vax movement.”  He was spot on, and now says the “Vax War” is about to get more intense, and there is nowhere to hide from it.  Celente explains, “What people have to understand is this is global.  We made this forecast almost a year ago.  We said, as we were watching the Covid war, that they were going to try to end it with the vaccines.  We have had a number of covers on ‘The Trends Journal’ showing the vax wars and the vaccines right next to Biden’s head.  There are three groups that run and own the United States. . . .The Military Industrial Complex . . . The Banksters . . . and The ‘Drug Lords’ also called Big Pharma. . .We gave billions of dollars of our money to invent this ‘warped’ speed drug that has not been approved by the FDA, and it’s a gene therapy drug.  We have been writing about this constantly and how they have been saying since April that you are going to have to get a booster shoot, and by the way, you will probably need one every year.  The big issue here that most Americans are missing is this is global. . . . The drug dealers, the Banksters and the Military Industrial Complex are in charge of the world.”

Celente says the pressure will continue to be pushed and coerced upon the so-called “unvaccinated” even though it is, in fact, an experimental human drug trial.  No one will mention the fact that half the country already has natural immunity, according to Dr. Marty Makary at Johns Hopkins University.  With death and injuries from fully vaccinated people going higher by the thousands every week, there are no facts that will sway the pro-vax crowd.  Celente says, “The facts don’t count.  If you show the facts, it’s misinformation if you put out facts.  It’s a conspiracy theory when you put out facts, and in the United Soviet States of America, you are not allowed to put facts on any social media because they will ban you.  You are not allowed to say anything to disagree with the government or the (so-called) ‘health experts.’”

Celente sees a huge trend in politics emerging and explains, “There are going to be new parties:   anti-vax, anti-establishment, anti-tax and anti-immigration.  The parties that unite under that will be the winning parties.  They have to unite under that.”

Celente does not have high hopes for the election fraud being uncovered to actually do anything because the system is so corrupt.

Celente also talks about the U.S. economy and that it should have tanked long ago, and the powers keep propping it up.  He also comments on gold, silver, Bitcoin and why New York City and many other cities are not coming back.

Celente says people will have to “unite to protect liberty and freedom,” and predicts it’s going to be a long fight.