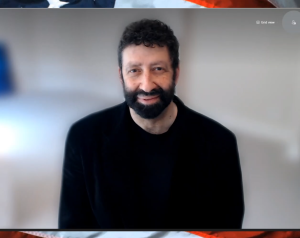 Five-time, best-selling author and renowned Christian leader Jonathan Cahn says America is paralleling ancient Israel before it was destroyed by God.  Can we turn it around before it is too late?  According to Cahn’s new upcoming movie called “The Harbingers of Things to Come,” we can turn it around, but it’s going to take repentance, prayer, faith and God to do it.  Cahn explains, “The harbinger is revealing the Biblical template of national judgment that begins with a strike on the land.  It happened in ancient Israel.  It’s a wake-up call, calling the nation back.  The nation is then given a span of time, years, to come back to God.  It’s mercy.  The same harbingers or warning signs that happened in the last days of Israel have now happened or have all appeared in America.  So, the warning is now for us.  Ancient Israel did not turn back.  It actually got worse, and that is exactly what happened.  In America, the strike came on 9/11, and all the harbingers, nine harbingers, all appeared starting with 9/11.  They were warning America of judgment.  We have followed the course of ancient Israel. . . . One of the things that ancient Israel did was lifted up its children on the alters of Baal and Moloch, and they killed their children.  Israel killed thousands, and we killed millions.  Therefore, this puts us in danger of judgment.”

So, how long do we have before God’s judgment starts?  Cahn says, “19 years before judgment.  When did it happen for America?  It was 9.11.2001.  Could it be the 19th year would be when great shakings would start coming on the land?  What’s the year?  It pinpoints the year 2020.  2020 is the year that the shakings come on.  The plague comes on.  Cities are burning.  We are still dealing with Covid.  We have been shaken and locked up, and all these things to this day. . . . In Jeramiah, he said a plague would come on the land in Israel.  We have a plague, and on the 19th year, the plague came.  What’s the name of this plague?  They call it Covid and then the number 19.  When Jeramiah is talking about the plague and shaking, he is linking it to the sin of killing the nation’s children in ancient Israel.  When was the first case of Covid in America?  It was called patient zero, and it made headlines across America.  It made headlines, and there was a date next to the headline.  The date was January 22 (2020).  January 22 (1973) is the date the Supreme Court legalized the killing of children.”

Cahn says, “We’ve got to pray that this thing gets undone.  God says if you want to kill your children, there is going to be a price to pay.”

America is doing what Israel did in their last days.  We are embracing immorality.  We are punishing the people of God.  We are still killing our children, and we are doing everything they did, and then judgment came.  We can’t say we were not warned.  The only answer we have is from God.”

So, is the recent Supreme Court decision to limit abortion something that can help save America from Gods judgement?  Cahn says, “It’s definitely a step in the right direction, but who knows?  This is a gigantic step, but at the same time, it’s not going to end abortion.  Abortion is still going to happen in the major places where it happens like New York, which is the abortion capitol of the country.  It’s still going to happen in all these places where it is happening, but it’s going to make it harder to kill babies.  That means it’s going to save lives. . . . We are seeing pushback on abortion in many places. . . . There is a pushback, but there must be revival if we are going to be saved.  The other forces are still going full blast.  They are still training the children.  So, we have to pray as never before, we have to stand as never before and proclaim the Truth (of Jesus Christ) as never before.

Cahn contends the states that continue abortion will do far worse than states that end abortion.

Join Greg Hunter as he goes One-on-One with best-selling book author Jonathan Cahn to talk about his upcoming movie “The Harbingers of Things to Come” for 5.7.22. 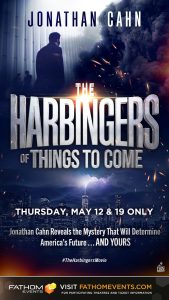 To find out about the upcoming Jonathan Cahn movie “The Harbingers of Things to Come,” click here.

To see the trailer for “The Harbingers of Things to Come,” click here.

All of Jonathan’s books including his latest THE HARBINGER II – are available at Amazon and everywhere else.