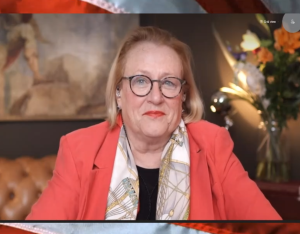 Catherine Austin Fitts (CAF), Publisher of The Solari Report and former Assistant Secretary of Housing (Bush 41 Admin.), says, “We are at war right now, and they are trying to kill us.”

Fitts is not talking about war with the Russians, but satanic Deep State globalists who are spraying us, injecting us and, at the very least, bankrupting us.  CAF explains, “We are in a war. . . . What this is about is the ‘Great Poisoning’ with spraying aluminum overhead, nano particles in the food, they are trying to feed us insects and synthetic food and inject us with secret ingredients. What about this is not obvious? . . . Stop worrying about the collapse is going to come or the war is coming.  It’s here, you are in it.  This is what it feels like, and I am not saying it cannot get worse, but this is now.”

What about sky high inflation coming?  CAF’s analysis considers increasing all-death mortality from the vax and other poisons “We the People” are being exposed to.  This is going to have a big effect on inflation in the coming years, and it’s not what you think.  Fitts explains, “I am going to be a really bad guy.  We have serious inflation baked into the cake through the monetary policies, but you have to consider accelerated deaths from the ‘Great Poisoning.’  Those deaths are very deflationary.  This will force a great deal of capital to the next generation.  Depending on deflation from the deaths, that offsets inflation tremendously.  It’s already offset it tremendously. . . . I think what we are looking at is much bigger than just the injections.  I think the ’Great Poisoning’ is a much more complex, long-lived process, and that’s what’s going to hit.”

CAF dives deep on how you can fight back and survive the evil being done to “We the People.”  Think local everything.  CAF identifies who is doing evil to us and how we can cut off the money financing this evil.  She also tells who the most important elected official is in every county in America and why you need to care who gets elected into this position.”

CAF says you must be knowledgeable and up to date about what is happening.  In closing, CAF says, “I used to have a pastor that said if we can face it, God can fix it.  I think reality is the doorway we have to walk through to find the pathway. . . , One of the reasons it has gotten as bad as it has gotten is many of us pretended it was not going on.”

Join Greg Hunter of USAWatchdog.com as he goes One-on-One with the Publisher of The Solari Report, Catherine Austin Fitts. (4.16.22)

To watch the last video interview with Rob Kirby on USAW, click here.