Home
»
Political Analysis
»
We Are in End Times – Michael Snyder 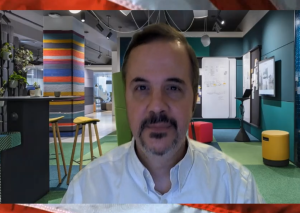 Journalist and popular author Michael Snyder says in his new book we are in “End Times.”  Few Christians would disagree.  So, where are we and what are we facing?  Snyder explains, “I believe we are living at the very end of a timeline.  I believe Jesus is coming back soon. . . .The Bible describes the End Times, the time just before Jesus comes back, as the most chaotic in all of human history.  In fact, Jesus told us there has never been a time like this before, and there will never be a time like this again.  Things are eventually going to get so bad that it is going to be the worst times in all of human history.  I also believe it will be the best time for the people of God.  There is no other time in human history that I would have rather lived than right now. . . .God put you here, if you are watching, here for a reason.  God put you here with a purpose and a destiny and a job for your to do.  If you understand that, you will be really excited about the future, even though things will be chaotic and wild. . . . Jesus said the time just before his return there would be wars and rumors of wars.  A couple of years ago, I came on your program and wrote a book and said there is going to be a war with Russia.  At the time, nobody was thinking about a war with Russia.  People told me, Michael you are crazy.  Of course, now we have a war with Russia. . . . We are getting dangerously close to a nuclear conflict.”

Snyder also mentions war with China, war between North and South Korea and war between Iran and Israel that are all boiling up right now, all at the same time.

Snyder also brings up starvation and famines talked about in the Bible that also point to “End Times.”  Snyder explains, “There have been droughts in different areas in the past.  We are seeing tremendous droughts affecting agricultural production all over the northern hemisphere.  Meanwhile, in Ukraine, the bread basket of the world, we have seen agricultural products restricted because of war with Russia.  We have this perfect storm for agricultural production.  Meanwhile, we have an energy crisis that is worse than any of us have ever seen.  It continues to get worse.  The price of natural gas has gone haywire because of this war between Russia and NATO.  Now, two thirds of all fertilizer production have already been shut down in Europe because the price of natural gas, and that is going to affect agricultural production next year. People need to realize that if we could not use fertilizer at all, we could not feed about half the world.  Half the world would instantly starve if there was no fertilizer used.  So, what we are facing is big-time global food shortages in 2023. . . . It’s going to be even worse even beyond that.  These things are going to intensify.”

On the economy, Snyder thinks the Fed will keep raising rates, and the real estate market will tank even further along with the economy.  Snyder predicts, “I don’t think the so-called pivot is close. . . . I think they are going to keep raising rates for now, and that is really bad news for real estate and for the economy because the economy is already being crushed right now.  We are already seeing a massive slowdown all over the economy. . . .I think the Federal Reserve is determined to get inflation down, but eventually they will be forced to pivot sometime in 2023.”

Snyder also says, “Basically, we are facing the collapse of everything.  We are already seeing mass extinctions all over the globe.  One study showed 32,000 species has declined by 69% over the last 50 years.  So, we are already seeing mass extinctions, and they are going to accelerate in the years ahead.  Natural disasters, wars and rumors of wars, pestilences and all the things we have been talking about are going to combine and create this perfect storm.  People will see their lives crumble.  Their lives, careers, what they planned for their future, their lives are going to crumble.  People are going to plunge into depression and despair, and they are going to see no hope.  Society will melt down all around them, and they won’t see any hope for the future.  If you want hope for the future, you need God.  You need the Lord Jesus Christ, not just to get you through what we are facing . . . but what we have in the end.  I read the book, and we win in the end.  We get to be with Jesus for all of eternity, and that is a really long time.  That is the most important thing beyond physical preparation.”

In closing, Snyder says, “Jesus warned us about all these things in advance so we wouldn’t be afraid.  We can look forward with courage.  Yes, bad things will happen, but it is when times are the darkest the greatest heroes are needed.  In the years that are coming, you have the chance to be a light and make a difference.  If you wanted to live in Biblical times, you are going to have that opportunity.  You are going to have a chance to do a tremendous amount of good in this world if you understand what is happening and be prepared in advance if you take advantage of this, that you rise up and be the people God created you to be.”

(Tech Note: If you do not see the video, know it is there. Unplug your modem and plug it back in after 30 secs. This will clear codes that may be blocking you from seeing it. Also try different browsers.  One last thing, turn off all ad blockers.   All this is a way to censor people like USAWatchdog.com.) 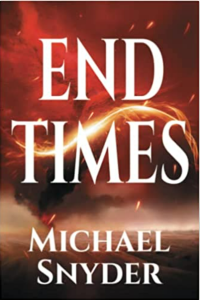 Besides TheEconomicCollapseblog.com, Michael Snyder has another free website:  TheMostImportantNews.com.

Michael Snyder has also published six popular books. The latest is called “End Times” You can find all of Michael Snyder’s books by clicking here.