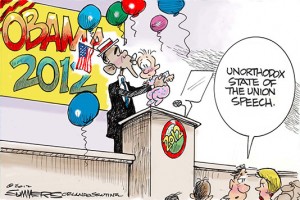 By Greg Hunter’s USAWatchdog.com  The Federal Reserve announced, this week, that it was keeping interest rates at near zero percent until at least 2014.  It sure doesn’t look like the so-called “recovery” is going very well.  The Fed also said it may “stimulate” the economy soon.  Print baby print—you wonder why gold has been rising in price?  Billionaire investor George Soros is scaring the heck out of everybody with his dark comments about the economy’s possible collapse, and riots in Europe and the U.S. he thinks are coming.  He actually said he’s worried about “survival.”  Things must be getting pretty bad if he is saying this type of stuff publicly. The Middle East is a mess with ongoing revolts in Egypt and Syria.  More sanctions are hitting Iranian oil, and Iran is, once again, threatening to close the Strait of Hormuz.  About 20% of the world’s crude oil is shipped through this narrow passageway every year.  Closing it will most certainly bring chaos to a very fragile world economy.  Greg Hunter of USAWatchdog.com brings you these stories and more on the Weekly News Wrap-Up.