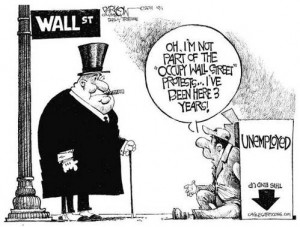 The big financial story this week comes from Europe.  To print or not to print, that is the question.  The answer is the EU will print money to bail out their banks.  Now Chancellor Merkel and Germany are on board along with the ECB and the IMF.  Heck, even the UK has started printing money again.  Ben Bernanke was grilled by a big Congressional economic committee in Washington this week.  He said the so-called recovery is “faltering.”  What I got out of the meeting is there is no plan to fix the economy.  No wait!  Yes there is–politicians are supposed to get the U.S. financial house in order.  Like I said, there is no plan to fix the economy.  The President is pushing his jobs plan, which both Democrats and Republicans have rejected.  Occupy Wall Street is hitting day 20, and it is spreading and getting bigger.  Finally, Steve Jobs, one of the founders of Apple Computer has passed away.  What was his secret to success?  Greg Hunter gives you all these stories and more on the Weekly News Wrap-Up from USAWatchdog.com.