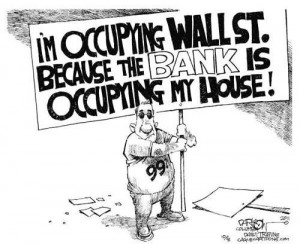 It only cost one or two billion bucks to get rid of Libya’s leader, Muammar Gaddafi.  Was it worth it?  He pled for his life, but was killed anyway.  Did NATO want him dead?  Would a war crime trial embarrass the West?  We will never know.  The EU sovereign debt crisis is at an impasse.  The debt of Spain was downgraded and France may be next in line for a cut.  Some very big French banks are in trouble.  Germany and France are at loggerheads over how to resolve the situation without a global meltdown.  Speaking of banks, it looks like Bank of America and JPMorgan are shifting tens of trillions of dollars in risky derivatives to parts of their banks covered by FDIC insurance.  Taxpayers are screwed again!  Occupy Wall Street is still going strong, and it’s not coming to an end anytime soon.  Is this the beginning of some new kind of class warfare?  Greg Hunter brings you these stories and more on the Weekly News Wrap-Up from USAWatchdog.com.