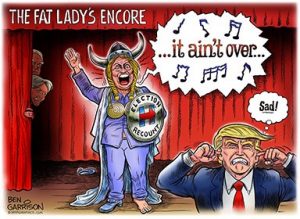 The Federal Reserve just raised a key interest rate a quarter of a point.  This was only the second time in 10 years the Fed raised rates, but the market had already beaten the Fed to the punch. In July, the interest rate for the 10-year Treasury was 1.46%.  Five short months later, the same rate is now more that 1% higher.  This is what it means when you hear the phrase “the Fed is behind the curve” on interest rates.  Losses in the global bond markets are stacking up with the rising rates.  Now, there are reports that China and other central banks are dumping U.S. debt at an alarming rate.  More than $400 billion in U.S. government bonds was sold this year alone.  Could rising interest rates knock Donald Trump’s plans for a loop?  The answer, in a word, is yes.

How many times has the mainstream media (MSM) said that the Russians hacked DNC emails and influenced the election in Trump’s favor? How many times has the same MSM said Trump doesn’t believe it?  Plenty in both categories, but why hasn’t the MSM said what the FBI has been saying all along?  That is “The Russians didn’t influence the election.” This is the latest from FBI Director James Comey.  Comey also says James Clapper, who is the Director of National Intelligence, agrees with the FBI that the Russians did not influence the 2016 election.  Case closed.

It looks like Facebook is going to start policing so-called “fake news” on its platform. Is this really stopping fake news, or inhibiting free speech to counter points of view of the liberal left?

(There is much more in the video presentation with Greg Hunter.)