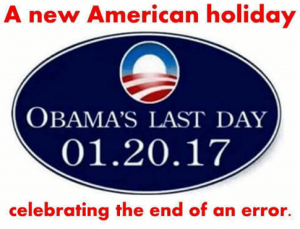 250,000 protesters, many of them paid and bussed in, are going to Washington D.C. to try to disrupt or stop Donald Trump from being sworn in as the 45th President of the United States.  The police and military are ready for them as tens of thousands of armed officers and soldiers are on hand to make sure the inauguration goes ahead as planned.

Outgoing Vice-President Joe Biden was in Davos, Switzerland, at the World Economic Forum and sounded the alarm about the populist movement sweeping the globe. Biden warned that the so-called “progressive” movement is at risk of collapsing around the world.  Maybe the “progressives” should try to come up with policies that actually help the majority instead of lying to get their way.  One big lie that comes to mind is Obama Care, which was called the Affordable Care Act.  It ended up being much more expensive than promised and skyrocketed health insurance rates for the vast majority of people.  Now, Obama Care is falling apart around the country, and that is one of the big reasons Democrats lost in November.

The mainstream media (MSM) is back in the phony polling business. During the 2016 Presidential campaign, all of the MSM had Hillary Clinton winning by a landslide, when, in fact, it was Donald Trump that won by a landslide.  Now, the MSM is back at it again saying Trump’s “favorability is dropping.”  It has been revealed that the latest ABC/Washington Post (WaPo) poll oversampled Democrats to get a bigger unfavorable number.  Not being honest and fair is the definition of “Fake News.”  A Rasmussen Reports poll done at the same time as the ABC/WaPo poll had a fair sample and revealed most Americans gave a favorable rating of Trump.

(There is much more in the video Wrap-Up.)

Author, filmmaker and radio host Steve Quayle will shed some light on why so many world, political and religious leaders are making trips to Antarctica. You will not want to miss this interview.