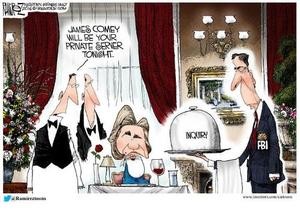 Lots of news about Iran this week being overlooked because of the so-called Panama Papers. Iran has issued a warning to the U.S. not to interfere with its ballistic missile program.  Iranian officials say any attempt to interfere with its weapons program would be crossing a “red line.”  Iran also wants to improve the destructive power of its warheads which would also help in detonating a nuclear armed missile.  Iran has recently test fired ballistic weapons and continues to develop them.  An Iranian General was quoted this week on Iranian state run press, as saying “The reason we designed our missiles with a range of 2000 km is to be able to hit our enemy the Zionist regime from a safe distance.” The Obama Administration is now talking about putting sanctions on Iran because it continues to develop ballistic missiles.  Might I remind you, the Iran deal to curtail its nuclear program was not signed by Iran.  By the way, the U.S. Navy just intercepted a load of weapons going to the Iranian backed rebels in Yemen.

The so-called “Panama Papers” were released this week, and it showed how a Panamanian law firm helped the global elite dodge taxes and launder money. Big wigs from around the globe have been implicated including, John Podesta who is running Hillary Clinton’s presidential campaign.  The law firm had offices in Miami and other U.S. locations, but when the story broke, they disappeared literally overnight.  Of course, you can set up shell companies in places like Nevada and Wyoming with little to no regulation.  Other shoes on this tax avoidance story are going to drop.  This is just more of the global financial fraud being exposed.

Anybody that thinks the overall economy is good should take a long look at this headline from Zerohedge.com. It reads, “It’s Probably Nothing”: Truck Orders Plunge 37% as Unsold Inventories Soar the Most Since 2007.”  If you are not buying new trucks to ship, then the economy is not growing–just the opposite.  In another comparison, Lehman Brothers is a bank that started to get into trouble in 2007.  The Lehman collapse in September of 2008 started the last global financial meltdown.  The stock chart of Deutsche Bank, which is orders of magnitude bigger than Lehman, looks like it’s following the exact same path as Lehman before it imploded.