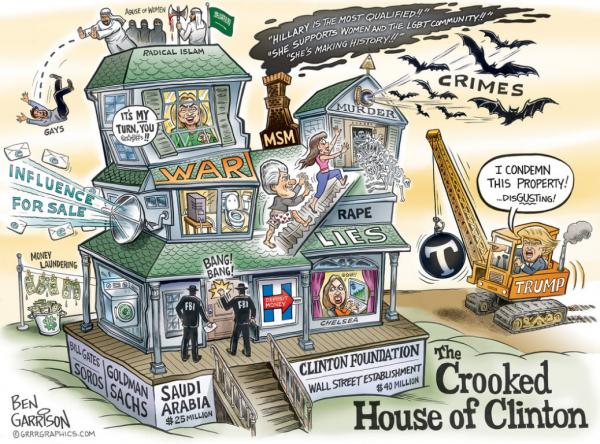 The mainstream media (MSM) calls their latest unfair coverage of Presidential GOP presumptive nominee Donald Trump “fact checking.” In reality, it’s a way for the MSM to hide the fact it is unobjective, totally unfair, and only out to destroy Trump in favor of the candidate and party they’re in the tank for, Democrat Hillary Clinton.  The only candidate the MSM is “fact checking” is Trump.  Meanwhile, every week, there is a new angle to the Clinton private server scandal, or her so-called charity, the Clinton Foundation, which some say is a huge charity fraud, or allegations of influence peddling while she was Secretary of State in the first Obama Administration.  There are no teams of reporters and producers on this ongoing story.  There is only “fact checking” by the clearly biased MSM on the candidate and party they hate.

I have been telling you “there is no real recovery for Main Street” for years now, and finally the MSM has stopped saying the “recovery” word when talking about the poor economy.  It’s so poor, the Federal Reserve, once again, could not raise interest rates.  Fed Chair Janet Yellen, this week, told Congress the economy is facing a number of “uncertainties.” She admitted to the Senate Banking Committee that the economy was “surprisingly weak.” Meaning, there is NO RECOVERY.  Debt is exploding central bank balance sheets, while interest rates are being pushed down.

There is disturbing news of increasing tensions with China and Russia that could lead to war. Near the South China Sea, the U.S. is conducting naval drills with two aircraft carrier groups, and China is upset.  In Eastern Europe, NATO is conducting war games, and Russia says Hitler did a similar thing before he invaded Russia from the east.  Neither situation signals an easing of tensions between these nuclear armed super powers.

(-Breaking News- Brexit has happed, but the crash shows how really weak it all was anyway.  Non of this panic would be happening if the EU and the global economy, as a whole, was doing well and honestly growing.  It’s not growing, and there is no recovery.  Just huge amounts of debt added to the global dung heap in order to put off the day of reckoning.    This is reality, and the crash was going to happen anyway because of all the negative interest paying bonds ($10.4 trillion in the EU.)  I predict this is going to really get started this weekend, and Monday and Tuesday  are going to be awful in the markets.  You should all be getting some cash out of your bank and stock up on some food and water now, just incase there is a disruption of credit.)