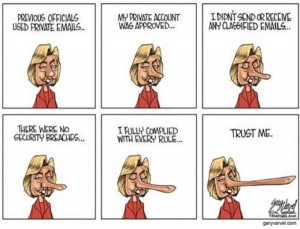 It was trash Trump week as far as the mainstream media (MSM) is concerned. It covered the Trump University lawsuit wall to wall but not a peep about the ongoing criminal investigation on Hillary Clinton and her unprotected private server. One of the big stories ignored this week by the MSM is former Bill Clinton advisor and pollster Doug Schoen penning a Wall Street Journal Op-Ed piece titled “Clinton Might not be the Nominee.” The title says it all, and yet the MSM ignored this huge red flag raised by a top Democratic insider about Hillary Clinton’s viability as a Presidential candidate for the Democratic Party.

The economy is going from bad to worse, and big names in the financial world continue to warn of impending financial trouble. $100 billion money manager Jeff Gundlach warns of “massive anxiety” with investors about the markets. UBS credit strategist Matthew Mish warns of a “tsunami” that will overwhelm the debt market. There is simply too much debt, and sales and production in many areas are falling.

Finally, it continues to heat up in the South China Sea over China’s man made islands. China claims a 600 mile area as its own. The U.S. says it’s a critical shipping lane in international waters. China is now reportedly setting up an air defense perimeter to counter what China calls U.S. “provocation.” It seems the war drums are beating louder.

(There is much more in the video broadcast.)