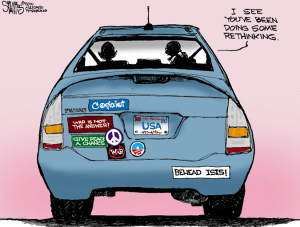 It’s official–Russia invades Ukraine.  Now you know why I have led every Wrap-Up with Ukraine.   I have been predicting wider war in Ukraine, and now we have one.  The President said in a press conference that there is not going to be a military response to this escalation, but my sources say the U.S. has been covertly helping the Ukrainians.  How do you think they have been able to overtake the pro-Russian separatists in Eastern Ukraine?  Looks like Vladimir Putin has had enough and is now directly involved with his military.  The Ukrainians have reinstated the draft; so, don’t think this is going to blow over quickly.  Even though Ukraine is not a NATO country, you can count on U.S. and NATO help to intensify.  How can bankrupt Ukraine expect to fight the Russian military?  It cannot do it without big time help, and it will be provided.  President Obama said he was going to ask European members of NATO for more sanctions, but sanctions will make an already bad economy in Europe even worse.  Maybe this is why the number two at the Fed, Stanley Fischer, was outlining bank bail-ins in a speech two weeks ago.  Haven’t we been told over and over again that the economy was in “recovery”?  Why lay out an official plan for bailing out systemically important banks now?  War will implode the economy, and a big one is coming.

The Israelis and Hamas have agreed to another cease-fire.  The Israelis wanted Hamas to disarm before they opened the borders of Gaza and extended fishing off the coast.  The new cease-fire allows the borders to be open for humanitarian aid and construction material to rebuild Gaza.  Hamas did not agree to disarm.  So, why did the Israelis cave in?  I think that the military wing of Hamas has been damaged so badly that it is now much less of a threat.  Israel sees wider war coming and wants Washington to resupply it with offensive weapons such as Sidewinder missiles that the Obama Administration stopped recently.  I heard Karl Rove on TV talking about destroying the Islamic State while helping the moderate Syrian rebels take down the Assad regime.  What kind of foreign policy is this?  I have been telling you all for months the U.S. has been arming the rebels and that a large part of them were al-Qaeda.  ISIS is an offshoot of al-Qaeda.  Our policy just keeps making bigger and bigger messes.  Even if the President does not have a strategy, wider war is coming to the Middle East.

Let’s not forget China.  The U.S. is sending another carrier group to Japan.  The Chinese buzzed one of our spy aircraft, and tensions are running high.  Do you think the Chinese think the U.S. is spread a little thin?  You know they do, and when you look at the wars and rumors of war, can you envision anything but global war.  Please keep in mind, that just this past week, the world’s biggest oil company, Gazprom, in Russia officially started accepting payment for its energy in rubles and yuan.  I am sure that’s not causing any of these war tensions around the planet.