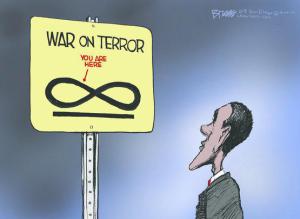 The U.S. is at war with ISIS, well, sort of.   ISIS is definitely at war with America.  ISIS produced a video warning of putting U.S. ground troops back in Iraq.  It looks like the President is listening to ISIS because he has said repeatedly that there will be no boots on the ground.  I don’t think a single general and many in Congress think this plan will work.  Everybody says we will have to use ground troops if we are serious.  We could have bombed ISIS months ago and didn’t, even though the Iraqi government was begging Obama to do so.  It probably would have been much more effective back then.  Why the delay?  Why do we continue to let ISIS sell oil and make millions every day?  Why don’t we sanction or bomb that?    Both the House and the Senate agreed to arm the “moderate” rebels in Syria.  Haven’t we already tried this?  Didn’t Senator Rand Paul accuse Hillary Clinton of running weapons out of Libya and into Syria?  We may not have overtly armed the so-called moderate rebels, but we certainly did it covertly.  We know at least some of these weapons ended up with al-Qaeda, and that is how ISIS got power.  Now, we are going to double down on a bad policy and overtly arm the rebels who are fighting side by side with al-Qaeda, according to Rand Paul.  Lots of people in the House and Senate on both sides of the aisle think arming rebels is a bad idea that won’t work and may backfire—again.

The President of Ukraine, Petro Poroshenko, is in Washington asking for money, and he’s getting it.  The U.S. is chipping in more than $1 billion in various aid packages.  The IMF is approving billions in future loans.  Poroshenko also wants weapons and, so far, he’s not getting them, at least, that is the story coming out of the White House.  Even though there is a ceasefire with the pro-Russian separatists, Poroshenko said, “It is Europe’s, and it is America’s war too. It is a war of the free world, and for the free world.”  Are you catching this?  Poroshenko is calling this a war, and it is far from over.

Meanwhile, Russia is hitting back for the recent round of new sanctions from the EU and the U.S.  Guess what is happening to gas supplies to the EU?  If you guessed gas supplies were cut, you guessed right.  Some are feeling supply cuts of 20% such as in Poland.  Guess what happens when supply gets cut?  The price goes up, and that is going to be the Russian game and ace card for the rest of this fall and winter.  If supplies get tight enough and prices get high enough, you could see the EU fall into a depression or they may knock off the fight in Ukraine.  We will see.

Finally, the Fed made a decision to continue the zero interest rate and easy money policies with no expiration date.  If things were really recovering, wouldn’t the Fed be jacking up interest rates and trying to normalize?  Of course, and that means the easy money policies are your tip-off that there is no real recovery.  Lots of people are now sounding the alarm, and even the IMF warns that “Sharp Downside Risks are Rising.”  Isn’t that a nice way of saying another big crash is on its way?  What could cause another market calamity?  It could be war, a terror attack, new markets for gold and silver in China or some unexpected bad news that makes everyone run for the exits.  Who knows, but another crash is coming.  Gregory Mannarino at TradersChoice.net said this zero interest rate policy is “stealing from savers” and what is really going on is a “gigantic wealth transfer via the stock market.”  Mannarino pointed out that margin debt (borrowing money to buy stocks) was near an all-time high, same as just before the 2008 meltdown.  Do the math.