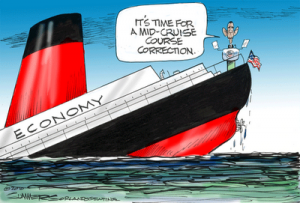 Germany brings Europe and the world back from the edge of a financial abyss.  It voted to expand the EU bailout fund.  This is not over by a long shot.  Things are much worse that in 2008.  For one thing, 3 big U.S. banks have been downgraded, and there were no banks downgraded in the last calamity.  On a political note, Herman Cain has been climbing in the polls right along with Ron Paul.  In a recent national poll, Cain loses to Obama by only a few percentage points, and Paul ties or beats President O.   I predict Cain, at the very least, will be a VP candidate if he does not win the Republican nomination.  Unemployment numbers are down but not really, and the Occupy Wall Street Protest is gathering steam.   I don’t know why anyone would be angry at greedy bankers that wrecked the world economy and got off scot-free.  Greg Hunter from USAWatchdog.com delivers these stories and more in the latest installment of the Weekly News Wrap-UP.