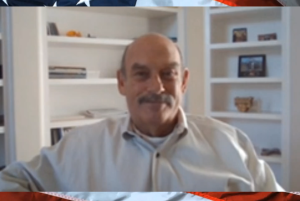 Precious metals expert and financial writer Bill Holter said in June it was “game over, they’re pulling the plug.”  The Fed went on an aggressive interest rate raising policy and is still raising rates.  Now, the economy is staggering.   Holter explains, “For sure, we are already in a recession.  We are now in the third quarter of negative growth.  I think it is laughable that people  put odds on whether or not we are going to go into a recession because it is obvious–we are already in a recession.  Rates rising have absolutely frozen the real estate market.  If you own a property, who is going to buy it?  Rates have gone from 3.25% to more than 7%.  I am on the record that once we saw a 3% yield on the 10-Year Treasury, you would start to see a tightness in credit.  Now, we are over 4%.  What few people are talking about is what has this already done to the derivatives market? . . . Think about how big the derivatives market is.  Total credit worldwide is $350 trillion, but you have derivatives pushing $2 quadrillion.  I have said this all along, derivatives will blow up.  Warren Buffett has called them financial weapons of mass destruction.  They are far bigger than central banks can fix.”

Holter goes on to say, “The real economy runs on credit.  Everything you look at, everything you touch and everything you do every day has many uses of credit to get to the final product or situation.  So, once credit freezes up, it’s completely game over.  In a past interview, I said they are pulling the plug.  They have to pull the plug because, mathematically, the debt cannot be paid.  The derivatives cannot perform.  So, they have to pull the plug.  They also have to do one other thing, and that is they have to kick the table over.  What will the false flag event be?  I have no idea. . . . They have to kick the table over so they can say our policies were working, but whatever this event will be stopped them.”

Holter thinks the odds of having the midterm election is “less than even.”  The Democrats are so far behind because of their disastrous economy.

Holter says, “If you think the inflation over the last two years is bad, just wait.  Along with that, you are going to have a huge wave that will last many years, but the initial destruction will probably happen in a three-day period of time. . . .You are going to see massive deflation, deflation of asset prices. . . . It will be inflation of the things you need and deflation of the things you have.”

Holter says, “From a math standpoint, the situation is so bad, liquidity is so tight . . . the whole shithouse is about to come down, and when it does, you will count your wealth in ounces and not dollars, yen or euros. . . . When all is said and done, it’s about how many ounces do you own.”

In closing, Holter warns, “The action you are seeing now is exactly what you saw in 1987, and this is what you saw in August and September of 1929.  This is what happens prior to crashes.  It’s massive volatility both ways . . . people are losing both ways.  The longs get stopped out on the downside, and the shorts get stopped out on the upside.  Then, the whole floor gives way, and that’s where we are.  We are right on the doorstep of a crash that will make 1987 and 1929 blush. . . . Many people are going to lose everything overnight.”

There is a lot more in the 39-minute interview.

We will let you know if or when Bill Holter starts his own website.  If he does, it will probably be BillHolter.com as he already owns this URL.  Let’s hope he does because we need him in the game.