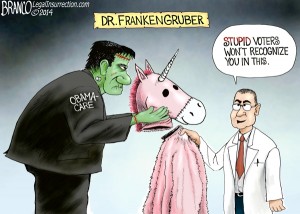 It’s official. Obama Care is a series of enormous lies that were crafted by Democratic leaders.  They all knew Obama Care was a lie, and they voted for the lies.  Now, there are new revelations from one of its chief architects, MIT economics professor Jonathan Gruber, who was caught on video tape repeatedly explaining how the lies were formulated and why.   Gruber basically said it would not have passed if Democrats told the truth about the bill, and he also calls the American voter “stupid.”   This is the biggest policy fraud ever perpetrated on America.  It is fraud because it involves trillions of dollars in taxes, co-pays, premiums and subsidies.  It was fraud crafted by Democratic leaders, and it goes all the way up to the President because Gruber had a meeting with Obama in the White House.  The Supreme Court is going to be hearing a challenge on subsidies for Obama Care, and I can’t see how the clearly documented and confessed Obama Care lies are not going to help kill this law.   Oh, and don’t expect much coverage from the mainstream media because it is mostly ignoring this revelation.  It is only the biggest policy lie ever, but I guess that is not a story if you are used to lying by omission.  CBS did cover the story, but only after the New York Times finally reported the Obama Care lie.

The Middle East is a mess and it is getting messier. Remember the White House telling us there would be “no boots on the ground” in Iraq a few months back?  Well, the President just sent 1,500 troops to back up the folks he already sent.  I cannot see any clear strategy or plan for Iraq.  Meanwhile, the Islamic State is making peace with some of its al Qaeda brothers and are teaming up against the Assad regime in Syria.  Now, the question is: Will the U.S. continue to bomb them?  The Islamic State also wants to start using gold and silver as currency.  In other news in the Middle East, Iran has come out with a plan to “eliminate” Israel.  That plan was tweeted out by Iran’s Supreme Leader.  I guess this was an answer to Prime Minister Netanyahu, who said a few weeks ago that Iran was the biggest threat to the world.  This is not the kind of talk you hear just before peace breaks out.

The ongoing war in eastern Ukraine is heating up again with charges of military escalation flying on both sides. The U.N is openly worried about total war in Ukraine.  This conflict is far from over, and it appears the ripple effect is spreading globally.  Russia is stepping up its flights of strategic bombers to include patrols of the Arctic Circle and the Gulf of Mexico.  Russia is also reportedly stockpiling gold in preparation for what it calls “economic war.” In case you haven’t noticed, there is an ongoing economic war between the West and Russia, and there is a big G-20 meeting next week in Australia.  I don’t think the U.S. dollar is going to fare well at this meeting.

Finally, some big banks were caught again rigging another market. This time, it is the currency market, or Forex.  JP Morgan and Citi are the American banks involved, and once again, just fines for the fraud.  This is more than a $5 trillion a day market.  The fines against all the banks total little more than $4 billion, which is a rounding error in a market this huge.  But wait, after years of rigging every market under the sun, LIBOR, stock, bond, housing, gold, silver and now the currency market, there may be some criminal prosecutions!!!  Please, I’ll believe it when I see it.