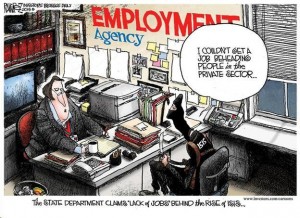 The Obama Administration suffered a crushing defeat this week on his executive order on immigration.  A federal judge ruled that basically the President did not have the power to make up his own laws outside of Congress.  The immigration executive order would have given temporary legal status to 4 to 5 million illegal immigrants, allowing them tax refunds, social security numbers and other government benefits.  U.S. District Judge Andrew Hansen’s decision pretty much kills this plan as the President would likely lose in the 5th Circuit Court of Appeals and also has little chance of winning a majority at the Supreme Court.

I told you the ceasefire in Ukraine would not last long, and it did not.  Fighting continues between the Ukrainian military and the Russian backed separatists.   Putin wants a land bridge to Crimea, and it sure looks like he is going to get one in Eastern Ukraine.  So far, Ukrainian soldiers are suffering defeat after defeat.  The land bridge strategy has been talked about in the past, and it looks like this is what is taking shape.  What will be the U.S. and NATO response?  We may have already seen it, and it looks to be a total defeat.

ISIS, or the Islamic State, is growing at an alarming rate.  USA Today illustrated it in a progression of maps.  This is stunning as the Islamic State terrorists are in North African countries such as Libya and in major parts of at least 3 Middle East countries.  The President and his Administration refuse to call these folks what they are–Islamic terrorists.  Of course, this is not all Muslims, but just a few percent of the 1.5 billion Muslims equals millions of potential radicalized terrorists.  It is getting harder and harder to take the President serious when, just this week, 21 Christians were beheaded on the Libyan coast.  The President is taking flak from Republicans and Democrats alike on this and many other issues.  This is the trend I predicted back in November, and I predict it will continue.

The debt deal between Greece and the EU continues to have a hard time getting off the ground.  The Greeks want more money, and the EU wants austerity so Greece can pay the money back.   Details about austerity and paying back the money seem sketchy at best.  Greece has somewhere around $340 billion in debt.  Many say it would take generations to pay it back.  At least half of the debt was acquired since the debt problems started a few years ago.  The new government there simply wants debt forgiveness and much less austerity. Oh, and the Greeks need some more money so they don’t cause a possible daisy chain of default in the Eurozone.  Of course, the other heavily indebted countries of Italy, Spain, Ireland and Portugal are watching this very closely, as I am sure they would like to have much of their un-payable debt cut to the bone, too.  I think Germany is going to be a very tough sell on more money and no repayment.