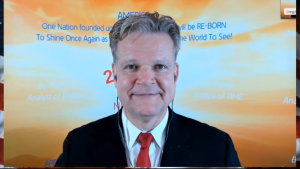 Biblical cycle timing expert and geopolitical and financial analyst Bo Polny has been predicting a new era of time, and it’s now at our doorstep.  Polny is forecasting truth is coming to humanity, and the scales will be rebalanced in what Polny is calling a Black Horse year in 2022.  Polny explains, “Now we are at the point of ‘The Great,’ the Great exposure, the great removal, the great fall, the great overturning and the greatest movement of God’s Spirit in the history of the world.  This will directly relate to the great wealth transfer.  This is supposed to be eminent and as early as Christmas, or as early as the start of January 2022.   We are here now, and that is prophetic.”

Polny says this reflects the Third Seal of Revelation and goes on to explain, “There are two things that are written in that and that is a Black Horse, which is a representation of death and its scales, which is a rebalancing of the financial system.  My opinion here is you cannot stop the Black Horse.  So, I believe we are going to see death.  We will see a mass death of many of these evil ones that have this sick, sick agenda.”

Polny admits the Black Horse might also mean death from the CV19 vaxed and boostered.

Polny’s Biblical timing is showing as much as an 80% stock market crash in 2022.  Polny says, “You’ve got the Black Horse event, and it tends to move with the stock market.  Every forty years, two things tend to happen:  a war and a huge crash.  If you look at 1942 and run a black line to 1982, we are looking at potentially an 80% stock market crash next year.  That would take the DOW down possibly to the 7,000 point range. . . .  Relating that to Bitcoin, that means it probably would crash too, and that would take Bitcoin down 80%.  That’s 80% off its high, and the high will be anywhere from $100,000 per unit to $300,000 per unit, but we have not seen the crazy yet.  We are going to see it go crazy because of the dollar event that is coming.”

The good news is evil will be fully exposed in what he calls a “global truth celebration.”  Polny predicts, “All these people fall.  All these shysters that have been running the world get exposed.  They not only get exposed, but they fall and lose all their wealth.  They lose everything and lose all their finances.  If the people running the market don’t get paid anymore, they are going to take their hand off the buy button, and the next thing you know, crash happens.  There are Seven Seals, and we have not seen the Third Seal, which is the great financial reset.  The financial reset comes with a Black Horse.  It’s truly historic, but it’s Biblical.  We are blessed to live in Biblical times.”

Polny says to protect your assets all you need is physical gold and silver, but number #1 is your relationship with God the Father and His Son Jesus Christ.

(This write-up is only a small sample.  There is more in the over 1 hour 10 min. interview.)