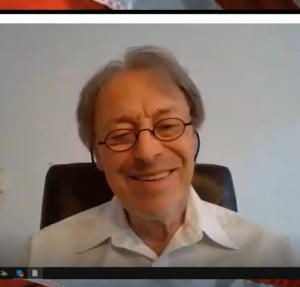 Renowned geopolitical and financial cycle expert Charles Nenner called the top of this market just 2% from the top in late January.  Nenner predicted the stock market could go down as much as 40%.  It went down about 38%.   After much money printing and to save the economy, the stock market came roaring back.  Is everything fixed and will the markets continue to rise?  Nenner says, “The cycle is up into the third week of June.  So, now things start to be risky.  We are looking for short-term sell levels, and we are going to lighten up. . . . What happened is not so crazy.  I have shown my subscribers what happened in 1929, what happened in 1973 and 1974, what happened in the 2000 crash and what happened in the 2008 crash. . . . There were huge bounces after the crash of 1929, the crash of 1973 and 1974, etc. . . . It’s very normal this latest bounce that happened, if you look at all the other market crashes. . . . Based on economics, the S&P is the most expensive it has been in the last 100 years. . . . If you do an overlay of what happened in 1929 and what is happening now, you will see it’s not so strange of what is going on now.”

Nenner contends, “You can’t keep lowering interest rates without consequences.  In Europe, it’s required to have pension funds 70% in bonds, and we have negative interest rates.  So, how are these people going to get their pensions?”

Nenner sees a pattern of “lower highs and lower lows” in the stock market and explains, “It’s like a ball.  You throw it up, it hits the ground, and it goes up again to a lower high, and it goes down again, and that’s how things work in nature. . . . Until now, it looked very strange.

Nenner has also predicted social unrest was more likely than a big war and look what’s happening with the riots in many U.S. cities today.  Nenner says, “There is a 60 year cycle of social unrest, and the last time was in the 1960’s. . . . The social unrest is just getting started. . . . Will it turn into civil war?  I don’t know because there have not been that many civil wars. . . . It is going to get worse and worse.”

On the war cycle, Nenner says, “The world is in for a major disaster.  The next war will have a huge amount of casualties.  It’s 5 minutes past midnight.”

On interest rates, Nenner sees, “A reversal in rates long term, and they are headed up. . . . Rates are going to rise.”

On Trump getting re-elected, Nenner says, “For the last 130 years, once the cycle on interest rates turns up, the party in the White House continues to be re-elected.  Isn’t that interesting?  Don’t ask me why.   So, it looks like (Trump) he’s going to be the next President based on that cycle.”