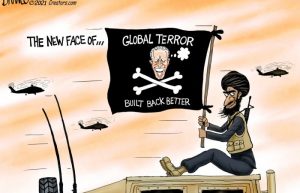 Anybody thinking what has gone on in Afghanistan is explained away by Biden Administration incompetence is in total denial.  This disaster was planned by the people in the background handling Biden and carried out by the military brass.  This planned disaster is way too stupid to be stupid, and all the people involved are guilty of treason.  Yes, you heard right, TREASON.  I can’t prove it, but this has all the earmarks of America hater Barack Obama pulling the strings for his puppet Joe Biden all the way.  This is the continuation of the controlled and deliberate destruction of America along with its image worldwide.  Russia and Saudi Arabia just signed a military cooperation deal.  You think that’s going to have a long term good effect on the U.S. dollar?  NO.  Marine Lt. Col. Stuart Schaller was patriotic enough to “demand accountability” from his generals and the Biden Administration in Afghanistan.  He was abruptly fired.  There can be no accountability if you followed orders exactly.  Afghanistan debacle is all  being done according to plan.  As I said, a foreign policy disaster this bad is “too stupid to be stupid.”

The lies continue as the vax narrative unravels.  Top social influencer Joe Rogan just came out and said he had Covid and took Ivermectin and a Z-pack (among other things) to get over it in three days.  That’s right, three days!  Ivermectin is a real cure that has been withheld by the FDA and CDC and trashed by mainstream media (MSM).  It is, in fact, a bonafide peer reviewed scientific cure.  Now, the MSM is attacking Rogan and Ivermectin as a crazy horse wormer cure that won’t work and is dangerous.  It’s a total lie.  Ivermectin has been given to humans 3.7 billion times in the past 30 years.  It’s totally safe and has been called a “miracle drug.”  Its creators won a Nobel Prize in Medicine for inventing it, and the WHO puts it on a list of “must have drugs” for any country.   They withheld real scientific cures, and are still offering dangerous and experimental vaccines that now require a booster to keep “working.”  The CV19 vax lie is being revealed and will soon be known by all.

Looks like that $3.5 trillion infrastructure deal by the Democrats and the Biden Administration has hit a major snag.  In the 50/50 split Senate, Democrat Joe Manchin wants to hit the “pause button.”  Why would he be doing that?  Manchin says he is afraid of what he calls “runaway inflation.”  Yep, the Senate can see what’s coming for the U.S. dollar, and it’s not good.  You should plan accordingly.  Stock up on everything, and get ready and stay ready.  The end of 2021 is going to be rough for the unprepared.

Join Greg Hunter of USAWatchdog.com as he talk about these stories and more in the Weekly News Wrap-Up 9.3.21.

Dr. Marc Faber of Gloom, Boom and Doom will be the guest for the Saturday Night Post.  He says we are going to be in for a wild ride in the economy.  He’ll tell us what he sees coming, and it ain’t good.