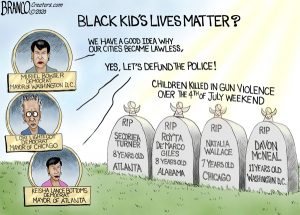 Democrat presidential candidate Joe Biden is trashing the police again. He said in an interview this week that because of militarized police forces around the country, the police have “become the enemy.” Biden and his party continue to run on the idea that the police need to be defunded, even though the majority of Americans do not want to defund the police.

Congresswoman Ilhan Omar continues to trash the country that saved her from a Somali refugee camp. In a recent speech, Omar said she wants to “dismantle the whole system of oppression” in the United States. She wants to bring in a new system and has no problem trashing the system that saved her. This is an increasing theme in the Democrat Party that has basically become communist and Marxist and despises America and what it stands for.

The economy is not recovering the way most people think it is. Government stimulus has covered up the severity of the economic demand the overreaction of the Covid 19 shutdown has caused. Some say the shutdown is being used for political purposes, but no one can deny it has caused what many are describing as the Greatest Depression that has already hit America.

Former CIA Officer and whistleblower Kevin Shipp will be the guest for the early Sunday Release. He talks about the coming violence from the Left that will continue to increase.