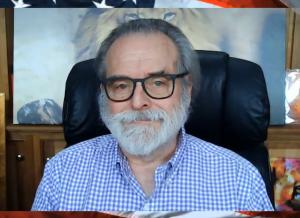 Renowned radio host, filmmaker and book author Steve Quayle contends the recent revelation about alien encounters on the CBS show “60 Minutes” is nothing more than theater to fool and set up the masses on the coming alien narrative.  Steve Quayle explains, “The plan has always been in the elite world to destroy humanity.  Even the Georgia Guidestones say this.  Quayle says, “When 60 Minutes took this on, you have to ask yourself how does something so concealed and so hidden all of a sudden have F-18 fighter pilots locking on to advanced technology. . . . The whole reason they are going to reveal it now is they are going to bring on the aliens as the world’s saviors.  Look at what mankind is doing.  We are destroying ourselves.  We are destroying the planet.  Every political buzz word is being used.  The true meaning of the alien reveal is they want . . . to release it in a staged manner. . . . The lie is this:  Mankind cannot save itself.  There are diseases, global warming, and the entire makeup of creation is out of balance.  Are we facing a pole shift, and are there massive problems that only the Aliens, our space brothers and our creators, can help us with?  I say this is the biggest bag of ‘bull sheet,’ which is the lie and the cover-up . . . . I am putting in all my last days telling people if you understand it, you will not be destroyed by it.  This is the big lie:  Aliens did not create us. . . . I am created in the image and likeness of the living God.”

Quayle is predicting the worst times ever are coming to the Earth starting soon.  Quayle says, “I was having a great life or what I thought was a great life.  The real life comes when you accept Jesus.  Here’s the deal, men’s hearts are going to fail them.  People are going to drop dead from fear.  Not everyone can handle the alien reveal in an intellectually and composed manner.  So, my goal is to take away the fear and put it into a Biblical and historic perspective. . . .”

Quayle says real trouble is coming soon and explains, “I think this fall and winter are going to turn into a fall and winter of heartbreak previously unimagined.  There will be shortages of everything that you used to be able to get.  I predict the word ‘selection’ will change to ‘availability.’  You won’t have the things you need.  It’s the globalist reset.  The globalist reset is simply this:  They will create the chaos that will destroy the old world and bring in their new world under Lucifer.  This is the Biblical construct of the Beast and the Anti-Christ. . . . The pro-vaccine destroyers will go against the truth tellers in total ruthlessness because they are going for the gold.  They now see there is no resistance to them.  People say they can’t do that, but we are watching our freedoms, our liberty and privacy being stolen.  Everything that made America great, look at where it is now.  It doesn’t matter.  Look at every law that has been broken.  Who cares, there is nobody to enforce it. . . . The point I am trying to make is the ‘Extinction Protocols’ and the global reset are the great destruction of 90% of the global population.  They are so bold.  Not only do they say they are going to do it, but they are telling you how they are going to do it, and this is why the ‘Extinction Protocols’ conference coming up is so important.”

In closing, Quayle says, “Jesus is not your fallback position–He is your foundation.”

(There is much more in the in-depth interview that is 55 minutes long.  Quayle also had a small correction: He meant to says Ben Rich worked for Skunk Works and not Frank.)

There is much free information on SteveQuayle.com.

You can also check out the virtual conference called “Extinction Protocols” coming out June 11 & 12, 2021, on GenSix.com.

If you want to see the free “Extinction Protocols” trailer, click here.