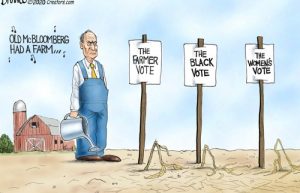 The Democrat Party looks like it is having an all-out war—with itself. This Democrat civil war is unlike any in modern history. You have a party that has turned communist/socialist fighting with elite members such as billionaire Michael Bloomberg. This battle for the party of theft and death is just beginning and won’t end well.

The Democrats and Deep State overlords are getting desperate. They are revealing themselves like never before. It was not that long ago that if you mentioned the so-called Deep State, people would think you were a tin foil hat wearing conspiracy nut. Not any longer. It seems all of the nuts are being revealed in the Deep State. This includes revelations of human trafficking that, according to President Trump, is 70% women and children. Thank you Prince Andrew, Jeffery Epstein for all the stories about global human trafficking and sex slaves getting out to the general public.

The China virus news seems it is going from bad to worse every week. No one believes the official stories coming out of China. China’s domestic production of goods has ground to a halt, and now Wall Street is waking up to the fact the money printing at central banks is NOT going to fix the coming global economic disaster hatched in communist China.

(To Donate to USAWatchdog.com Click Here)  (Update 2/23/2020 This video was finally monetized by YouTube, but not until after tens of thousands of views with no or little revenue.)

Dr. Chris Martenson, co-founder of PeakProsperity.com, will be the guest for the Early Sunday Release. Martenson is an expert on the economy and is also an expert on infectious disease. He is going to tell us how bad the China virus will get and what to do to prepare.