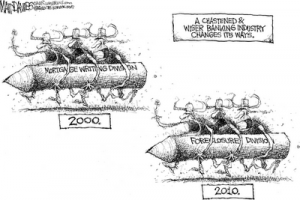 It has been called foreclosure gate, robo signing, foreclosure fraud or just sloppy paperwork; but no matter what you call it, it’s signaling a new financial meltdown for the U.S. economy.  The securitized mortgage debt created in the real estate bubble is being called the “largest fraud in the history of capital markets” by people like renowned gold expert Jim Sinclair.

The big banks packaged mortgages into securities (mortgage backed security) and then sold them to pension funds and investors.  The mortgages in these securities had to meet what is called “contractual representation and warranties.”   That basically means the bank had to legally be able to prove it owned the property it was selling in the security.  Once more, the mortgage applications and appraisals were required to be free of fraud.  The “robo signing” is all about creating paperwork that proves the banks owned the property in the “security” and the mortgage was done correctly.  In millions of mortgages, the banks either can’t find or do not want to produce the original paperwork with the borrowers signature  (promissory note).   Now, investors want to force the banks to buy back trillions in mortgage backed securities that have lost value.   In a recent interview on MSNBC, Congressman Brad Miller said, “. . . in almost every contract if they (the MBS’s) weren’t what they were contractually required to be, the bank had to buy them back.  That’s probably more than they could buy back and we may be back where we were two years ago.”  (Click here for the entire MSNBC interview with Rep. Miller.)

Two years ago, Treasury Secretary Hank Paulson warned Congressional leaders we were just days away from a complete “meltdown of our financial system, with all the implications here at home and globally.”  I think we will be getting to that point again and soon.  Sinclair says, “Securitized mortgage debt is going to be the final shot that kills all kinds of financial entities in the Western world.”  (Click here for the complete Sinclair post at JSMineset.com.)

Some in federal and state government are calling for a moratorium in all foreclosures across the entire country.  CNBC recently reported, “40 States to Launch Probes Into Foreclosure Mess.”  The story goes on to say, “The attorneys general of up to 40 states plan to announce soon a joint investigation into banks’ use of flawed foreclosure paperwork.”  (Click here for the complete story.)  Wall Street is sending up warning flares that the economy could be damaged even more if foreclosures are stopped.  (Many banks have already stopped foreclosures in some states.)  According to a Reuters story, “The Securities Industry and Financial Markets Association said foreclosure processing mistakes should be fixed but said dramatic nationwide action could unjustly impose losses on the investors who help provide credit to the $11 trillion U.S. mortgage market.  “It is imperative…that care be taken in addressing these issues to ensure that no unnecessary damage is done to an already weak housing market and, in turn, that there is no further negative impact on the economy,” SIFMA Chief Executive Tim Ryan said in a statement.”  (Click here for the complete Reuters story.)

The White House is also against a moratorium on home foreclosures because it is afraid of “unintended consequences” for the residential real estate market.  This comes out after the White House said it would not sign a bill (HR 3808) that some say would make it harder for homeowners to fight foreclosure.  I wrote about this in a post last week called “Did Congress try to Legalize Foreclosure Fraud?”  Now, some are calling into question whether the President will truly Veto the bill.  If the President does nothing (which is the essence of what is called a “Pocket Veto”), it might become law anyway.  (Click here to read more on this story.)

According to independent analyst Reggie Middleton of BoomBustBlog.com, the housing market and economy are headed for another crash.  In a recent post, Middleton says, “The robo-signing mess is just the tip of the iceberg, mortgage putbacks will be the harbinger of the collapse of big banks that will dwarf 2008!”   Middleton goes on to say, “This is what is truly at stake – the United Statesis now at risk of losing its hegemony of the financial capital of the world! Why? Because when we had the chance to put the injured banks to sleep and redirect resources into new productivity, we instead allowed politics to shovel tax payer capital into zombie institutions as they turned around and paid it right back out as bonuses. As a result, significant capital has been destroyed, the original problem has metastized, and the banks are still in zombie status but with share prices that are multiples of the actual values of the entities that they allegedly represent – a perfect storm for a market crash that will make 2008 look like a bull rally!”  (Click here to read the entire Middleton post.  It is a good one!)

The latest housing scandal has been with us for awhile.  The bailouts of the 2008 meltdown just papered over the near financial collapse with printed money from the Federal Reserve.  This did not address the real problem with the banks, which is enormous debt and leverage. The government just painted over rust, and it’s starting to show through again—only this time, even worse.