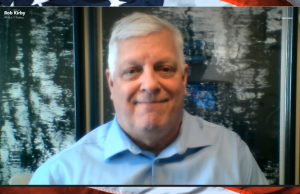 Macroeconomic analyst Rob Kirby says all the problems of the world, whether it’s the truckers in Canada or the trouble in Ukraine, can be traced back to “obscene” secret money creation and the lies to cover it all up before it blows up.  Kirby, who lives in Toronto, Canada, and has a front row seat to the Canadian Freedom Truckers says, “What’s occurring with the truckers in Canada, what’s occurring in Ukraine, what’s occurring in the South China Sea regarding Taiwan, what’s occurring in the Koreas, all the geopolitical tension everywhere in the world is all traceable back to the money.  The amount of money that is being created is stunningly larger than what has been acknowledged and published for consumption.”

As just one example of out-of-control money printing and massive fraud, Kirby uses the recent work of Dr. Mark Skidmore and the $400 billion of investment assets at Social Security being churned more than 100 times the amount.  Kirby explains, “Social Security has $400 billion in investable retirement assets.  In the 2019 one-year time frame, Dr. Mark Skidmore showed that those $400 billion in investable retirement assets were turned over in excess of $44 TRILLION.  That is a neon sign for a colossal fraud any way you look at it.”

Kirby says the Fed’s balance sheet is another huge fraud, and instead of nearly $9 trillion in debt, it’s probably more like “$100 trillion in unacknowledged money.”  Kirby says, If you add $100 trillion to the Fed’s $8.8 trillion balance sheet, you have a different picture than what is being presented to humanity. . . . What we have here is bigger than life, and it’s obscene.  It’s the kind of material horror movies are made of. . . . The problem is the money is at the core of everything.  When you created that much money, you have to lie.  If it becomes understood just how much money there really is, the dollar would lose its place as the world’s reserve currency immediately. . . . They are living a lie.  The problem with telling lies is you have to tell more lies, and you have compound lies.”

In short, Kirby points out the U.S. government is lying its tail off about the true inflation number.  This is why in his last interview Kirby said, “The dollar has stage four cancer.”

Kirby predicts the PM of Canada, Justin Trudeau, will call in the UN troops “the Blue Helmets” to quell the protests against the vaccine mandates.

Join Greg Hunter as he goes One-on-One with analyst Rob Kirby, founder of KirbyAnalytics.com 2.12.22. (There is much more in the 36 min. interview.)

To help Kirby continue his work, you can donate via PayPal, and that tab is located on the left-hand side of the home page.  It says, “Help Support Indy Media.”