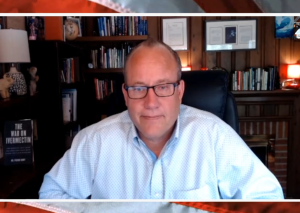 World renowned CV19 critical care and pulmonary expert Dr. Pierre Kory thinks the CV19 vax is a “humanitarian catastrophe,” and it is being “ignored . . .suppressed and censored” through a well-organized global propaganda campaign.  This propaganda will be responsible for millions of deaths that have already happened and many more millions of CV19 vax deaths in the future.  Dr. Kory explains, “We have data screaming at us everywhere we look.  You can start with the life insurance data, India’s data, Germany’s data, and we know people are dying at unprecedented rates.  That is one thing.  We know that disability is through the roof.  No one has seen VAERS (Vaccine Adverse Event Reporting System) with the numbers it is screaming.  Now, we . . . are seeing buried miscarriage rates and spontaneous abortion rates 70% and up to 90% in pregnant women. . . . We are still seeing propaganda and all of these messages to get your (CV19) shot even though there is no logic to it. . . . Maybe people are blindly following these instructions and there is no more critical thinking or the control of the information is leading to mass casualties.  This is literally a humanitarian catastrophe. . . . We have never seen this.  This is a global condition. . . . We have a global catastrophe because the (bad) information has infected almost every country on earth. . . . Wherever you look the data is so ominous.  The myocarditis and dropping dead is incessant.  It’s from every country in the world.  You hear everyday reports of young people doing normal fun activities, like going to the beach or going to the park, and they are dropping dead.”

Dr. Kory is actively trying to find treatments for people harmed by the CV19 vax, but that is not the biggest problem he faces.  Dr. Kory says, “People are being told things (like getting CV19 booster shots) that are putting them at grave risk.  I don’t know how to combat a global technological propaganda instrument.  We have never had that before.  I don’t think we have ever had the same messages and the same stories being shot out 24/7.  I have been saying this for a while, and the world has gone mad because of unrelenting propaganda and censorship.  We have never had this much power and this much propaganda . . . never the same story being told to the entire globe at the same time and the same lie.”

Dr. Kory says, “Not only no more shots, but I would say we need a national cry to stop the vaccine campaign. . . It’s not going to start in America because this is the United States of Pharma.”

This is why cheap, effective drugs such as Ivermectin are being banned here in America and around the world.  Dr. Kory says, “We are at war here.  You cannot have Ivermectin in the marketplace.  It threatens the vaccine, Paxlovid, monoclonal-antibodies and Remdesivir.  Ivermectin is a drug that is the biggest financial threat to the biggest market in pharmaceutical history.”

Join Greg Hunter as he goes One-on-One with Dr. Pierre Kory, one of the top pulmonary and Covid Critical Care experts on the planet, who is co-founder of the Front Line Covid-19 Critical Care Alliance (flccc.net) and author of the upcoming book “The War on Ivermectin.”

All the information is free on the Front Line Covid-19 Critical Care Alliance website flccc.net.

If you want to preorder Dr. Kory’s book (coming out in October) “The War on Ivermectin,” click here, or click here.

If you want donate to the FLCCC Alliance, click here.

Donate by snail mail below: