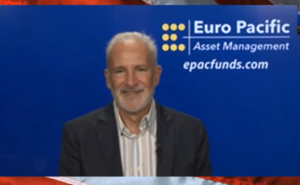 Money manager and economist Peter Schiff says the markets think the Federal Reserve can win the fight on inflation by raising interest rates.  Look at the falling stock market, and many people are getting increasingly nervous that something is going to break.  Schiff explains, “The Fed is in the same predicament now, only worse, because it’s a much bigger bubble than the one we had in 2008 or 2018.  We have a lot more debt now, and the economy is less able to tolerate 5% interest rates than in 2008 and 2018.  Think about it.  If the Fed Funds Rate got to 5%, I’ll bet the 30-year mortgage rate would be 9%.  People can’t afford to pay 9%, especially when they are borrowing 95% of the value of the home.  So, it’s a massive mortgage. . . . This housing market was built for 3.5% mortgages, not 9% mortgages.  Look at the federal government.  We have a $31 trillion national debt.  If the Fed got up to 5% . . . .how is the government going to have to spend $1.5 trillion a year on interest payments on the national debt? . . . It’s impossible.  What about all the debt corporations took on?  It has to be rolled over.  How are they going to go from 2% or 3% to 7% or 9%?  What about all the junk bonds?  How are they going to survive?  What about all the municipalities and state governments that have borrowed money at low rates?  How are they going to roll that debt over?  What about commercial real estate?  How are they going to survive?  . . . The Fed created an economy completely dependent on near 0% interest rates and inflation. . . . There is going to be no way to finance these companies.  So, there is going to be a massive implosion.  If the federal government is going to stop monetizing debt and raise interest rates, we need massive cuts to government spending.”

Stop monetizing debt and stop printing money?  Don’t bet on the Fed sticking with that plan.  Schiff says, “The dollar is going up because people think the Fed can succeed at bringing inflation down to 2%.  Every time we get inflation that is above consensus, the market thinks the Fed is going to have to fight harder to win.  So, they bid up the dollar because the Fed is going to have to raise rates more.  They don’t realize inflation getting worse is a sign that the Fed is losing, and eventually it will surrender.  Inflation will win, and inflation is here to stay.”

Schiff contends, “You are going to get guaranteed higher inflation. . . . The Fed is damned if it does and damned it is doesn’t. . . . The day of reckoning is finally here.  We have this massive inflation problem, and there is nothing that governments and the central banks can do to solve it because up until now, inflation has been their solution for every problem.  Now that inflation has become the problem, they have no solution.”

Schiff says own physical assets like gold and silver along with companies that produce things people must have to live such as food and energy.

There is much more in the 46-minute interview.

Join Greg Hunter of USAWatchdog.com as he goes One-on-One with money manager and economic expert Peter Schiff, founder of Euro Pacific Capital and Schiff Gold for 10.08.22.

There is much free information and articles at both of Peter Schiff’s websites:  EuroPac.com and SchiffGold.com.