Home
»
Market Analysis
»
Look Out Above for Gold and Silver Prices 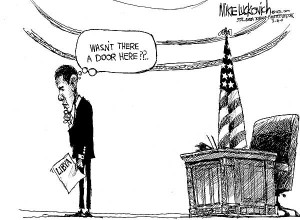 Gold hit another all-time high yesterday, closing well over $1,450 per ounce.  Silver’s closing price of more than $39 per ounce is the highest it has been in 31 years.  Why the big jump in gold and silver prices?  The answer is pretty scary because there are many reasons precious metals are heading higher.  Let’s start with the most obvious —inflation.  Kitco.com reported yesterday, “The precious yellow metal got a fresh influx of investment buying based upon heightened inflationary expectations, safe-haven demand and a weakening U.S. dollar index.” (Click here for the complete Kitco.com story.) You can give the same reasons for rising silver prices.

In the case of silver, many experts say it is way undervalued and will outperform gold as an investment.  Asset manager Eric Sprott said Monday that one of many reasons the silver price is rising is that demand “is massively underestimated.” Financial writer Harold Goodman recently wrote an excellent silver article for SeekingAlpha.com.  Goodman backs up the “undervalued” silver premise by saying, “This next chart (below) is from a brilliant article by Mark J. Lundeen, and shows the price of silver in constant 1920 dollars, but indexed for inflation using U.S. currency in circulation rather than a flawed metric such as CPI.” 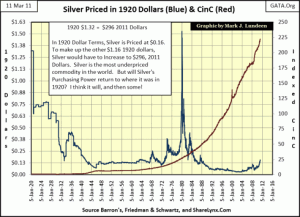 “The surprising result is that silver today is priced at only $0.16 in constant, inflation adjusted 1920 dollars, even though it was selling for $1.32 in 1920! To reach its equivalent 1920 price of $1.32 an ounce today, it would have to be priced at $296 an ounce. And unlike 1920, there is a serious shortage of physical silver inventories available for sale today . . . .”  (Click here to read the complete Goodman article on SeekingAlpha.com)

Then, there is the budget situation in Washington D.C. that is pushing up gold and silver prices.  Congress is arguing over cutting the bloated $3.7 trillion budget by less than 1 percent.  Ironically, the issue of raising the debt ceiling from $14.3 trillion must be done in a few weeks or the government will be forced to default on its debt.  Raising the debt ceiling is not an “if” but a “by how much” question.  Odds are it will be a $1 trillion increase, and that amount will have to be borrowed or printed by the government.  Investors around the globe are waking up to the fact that the U.S. will never be able to pay off its enormous debt with anything resembling the buying power of today’s dollar.  Monday, a CNSNews.com story highlighted the “March Madness” of the Federal government’s insane spending.  The report said, “That $1.0528 trillion in spending for March equaled 8.2 times the $128.179 (billion) in net federal tax revenue for the month.  The lion’s share of this federal spending went to redeem Treasury securities that had matured during the month—most of which were short-term Treasury bills that have terms of one year or less.” (Click here for the CNSNews.com story.)

Please remember, the Fed is printing a staggering $75 billion a month to finance 70% of the U.S. government’s expenses in what is known as QE2 (Quantitative Easing.)  A star panel of experts I polled in January all agree that QE, or money printing, will not end.  I reported back then, “In summary, all the experts I polled think QE Will Not End.  That will surely mean an imploding U.S. dollar and exploding inflation.  This is scheduled to happen by the end of June, making this the most predictable financial calamity in history.” (Click here to read the entire original post – Economic Stimulus: Quantitative Easing QE3) Creating money out of thin air is inflationary, and gold and silver are reacting to the government’s printing press.

The U.S. is now involved in 3 expensive wars that are helping to bleed the country dry.  Even though the Obama administration promises no U.S. troops in Libya, the CIA is reportedly already on the ground there.  Former CIA Officer Michael Scheuer thinks President Obama will be forced to choose between defeat or ground troops in Libya.  In a recent CNN interview, he said, “The choice may come down to admitting it was a mistake and being defeated in the sense Gadhafi survives, or putting ground troops in.  Nations are a lot like people, they don’t like to admit mistakes.” (Click here to see the complete Scheuer CNN interview.) Scheuer thinks Libya is a bad idea because it will cost enormous amounts of money at a time when America is “nearly bankrupt.”

Are taxes going up to pay for Libya or the wars in Afghanistan and Iraq?  Of course not.  The Bush tax cuts were extended–and why not?  The U.S. can simply print money, and that devalues the buck while increasing the price of gold and silver.   The world is fearful of possible supply disruptions of oil from North Africa and the Middle East.  That, too, pushes prices higher, and nothing can stoke the inflation fire faster than higher energy costs.

The revolutions, unrest and wars in North Africa and the Middle East are not going to be resolved quickly.  The nuclear catastrophe in Japan will not be cleaned up soon, and may not be cleaned up in some areas in a hundred lifetimes.  Japan will need cash, and the U.S. will print more money when Japan sells its huge treasury holdings to raise money for rebuilding.  Likewise, there is no end in sight for America’s debt and budget problems.  All these things signal a “look out above” for gold and silver prices and a “look out below” for the value of the beleaguered buck.