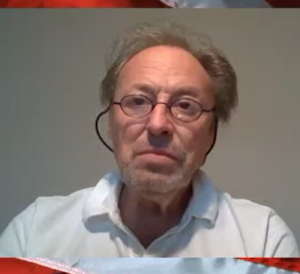 Renowned geopolitical and financial cycle expert Charles Nenner says his “stock market cycle has topped.” Look no further than the more than 400 point pounding on Monday for proof. Nenner says, “If we see a good close on the S&P futures for March below 3230, that’s only a couple of points away from here. Then we get lower price targets, and then this could turn into something much more serious. . . . These bull markets don’t stop on a dime. So, we can go up and down and up and down. . . . People always think there is a buying opportunity . . . but this market will go down in a strong, strong way.”

On interest rates, Nenner predicted months ago that rates would go down, and they did. What does Nenner say now? Nenner says, “The same thing . . . this is going to continue for most of the year. Again, we don’t know what the news is. It could be a rush for safety. It could be a recession. It could be deflation. . . . I think we will have a deflationary crisis, and that’s why interest rates will go much lower.”

On the Fed trying to suppress interest rates by flooding the repo market with cheap money, Nenner says, “People that thought they were safe and had money put aside are having to go back to work when they are 80 years old. So, the Fed could maybe succeed in what they do, but they are bringing down the whole system.”

How much higher could gold go in the longer term? Nenner says, “I made the calculation that if the system breaks down and we have to go back to the gold standard, then gold would be around $60,000 per ounce. Who knows what’s going to happen.”

Another one of Nenner’s cycles that has turned up is the “War Cycle.” Nenner says, “Remember a few years ago, I said the internal war cycle was more frightening than the external war cycle, especially for the United States. We are going to have social unrest and uprising that is going to be more dangerous, and that is more dangerous than the United States going to war. . . . What we are looking for is the big war that still has to come. I still say I don’t think it comes in the Middle East. It will come in the South China Sea. . . . Just because it’s time.”