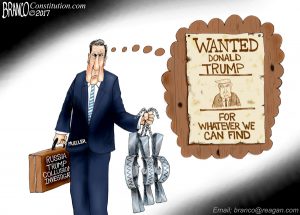 The Middle East had near dogfight aerial combat in the skies over Syria. The U.S. shot down a Syrian fighter jet and an Iranian drone.  Russia immediately halted cooperation with the U.S. in Syria, and warned it would “intercept” any aircraft in areas it controlled.  Russia also charged the U.S. that America was “supporting terrorists.”  One former Obama Administration insider says, “The risk of a big war is rising.”

If you want to measure how well the economy is doing, you should take a look at the hard data and the soft data. The soft data shows the so-called “Trump Bump” has decidedly turned negative, and the hard data of the real economy has also taken a plunge.  In the real world, the State of Illinois has joined the ranks of Puerto Rico for major money problems.  The Illinois Comptroller says “The state can no longer function.”  Illinois has no money to pay its bills or interest payments and for all intents and purposes is insolvent.  Powerball has cut off Illinois from selling its lottery tickets because the state is dead broke.  Many other states are going to be in the same shape as Illinois in the not-so-distant future.

Donald Trump had it right when he said if it were not for the three to five million illegal votes, he would have won the popular vote in 2016. According to a new study by the nonpartisan group “Just Facts,” 5.7 million noncitizens “may have cast illegal votes.”  Keep in mind, this does not take into account massive voter and election fraud in places like Detroit, where there were as many as 6 times more votes than registered voters.

Join Greg Hunter as he looks back at the week’s top stories in the Weekly News Wrap-Up.

Gerald Celente, Publisher of The Trends Journal, will be the guest in the “Early Sunday Release.” Celente looks at his two top trends:  war and a weakening economy.