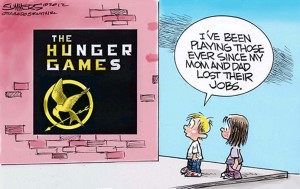 The top story on the USA Today Newspaper was titled “NFL’s Big Hit.”  I could not believe this was their lead.  This week, there were several stories that I think should have taken its place as the single most important thing Americans should know about.  We had a crazy al-Qaeda gunman on the loose that was running around Southern France killing French soldiers and Jewish children. Gas prices continue to rise, and the head of the IMF says there could be a 30% spike in oil prices.  There’s a possible military coup in China as reported by the Washington Times.

There is the ongoing threat of war between Israel and Iran which is producing some sort of headline every week.  There was a huge story about Russia landing Special Forces in Syria.  The U.N. called this a “bomb.”  Republican leadership wants to cut more than $5 trillion out of the budget over the next ten years because of the severe budget problems and red ink America is facing.  And finally, President Obama’s Executive Order (EO) called National Defense Resources Preparedness (NDRP) which comes on the heels of NDAA.  This EO allows the government to take pretty much whatever it wants including crops, farm equipment, vehicles, boats, aircraft and fuel to “prepare” for the national defense.  This includes making people work for free.  You think I’m kidding about the free labor?  Here’s a line straight from the EO that says, “. . . to employ persons of outstanding experience and ability without compensation. . .”  None of these stories were newsworthy enough to make the front page?  All these stories and more are coming from Greg Hunter of USAWatchdog.com in this installment of the Weekly News Wrap-Up.