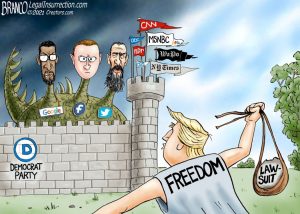 The CDC has released the latest adverse reactions and deaths from people getting shots for CV19.  Now, nearly 7,000 are dead from the so-called jab, with more than 400,000 reported injuries.  Please keep in mind, a 2011 Harvard Health Care study (page #6) says “fewer than 1% of vaccine adverse events are reported.”  The jab is, in fact, an experimental gene therapy human drug trial that they would like to be approved as a “vaccine.”  None of the so-called vaccines are approved, and they are only labeled “Emergency Use Authorization” (EUA) by the FDA.

President Donald Trump strikes back at Big Tech after they removed him from all social media platforms.  Trump says he’s suing Twitter, Facebook, Google and their executives for “illegal unconstitutional censorship.”  What will the discovery look like is my big question.

The so-called “reflation trade” looks like it is losing steam.  The Fed is acting like it is finally going to taper the easy money as inflation heads much higher.  Some bigtime investors and market experts like Dr. Michael Burry says we are headed for the “mother of all crashes” because of “the greatest speculative bubble of all time in all things.”  Burry called the 2008 financial crisis at the top.  I would not bet he’s wrong this time either.

Join Greg Hunter of USAWatchdog.com as he talks about these stories and more in the Weekly News Wrap-Up 7.9.21.

Financial writer and gold expert Bill Holter of JSMineset.com will be the guest for the Saturday Night Post.