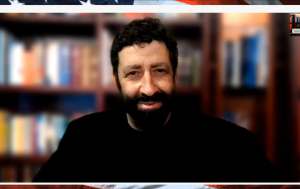 Six-time, best-selling author and renowned Bible expert Jonathan Cahn has written a new book explaining the chaos and upheaval going on all over the world today.  In a word, evil is trying to take hold of our world.  Cahn’s book, “The Return of the Gods,” shows how demons and false gods are trying to repossess America.  Cahn explains, “Evil is evil, and it’s manifesting in so many places all across our culture—in every way.  It involves falsehoods, it involves lies and changing morality on sexuality.  It involves everything.  Two thousand years ago, this is all they had.  It was possessed back then.  So, when Jesus sent the Gospel into the pagan world, it was a clash of spirits and principalities of gods.  There is the One True God, and then there are the false gods.  The Bible says we do not war against flesh and blood.  We are not against people.  We war against principalities.  So, when the gospel comes in, there is this huge war.  The pagans are trying to kill the Christians or you worship our gods.  That’s why they were trying to kill them because Christians would not worship the gods.  It was a war of the gods, but at the end of the day, the Gospel prevailed and the gods departed.  The temples were emptied out.  The shrines were abandoned.  The gods of the ancient world were gone, but we are not just talking about gods, there are spirits behind them—demonic spirits.  They don’t end, they stay there.  So, the question is what would happen if the gods or the evil spirits returned to America and returned to the world?  The fact is they have returned. . . . If western civilization was possessed by the evil spirits, the Gospel got rid of them.  It was the greatest exorcism in history.  What happens if that nation ever turns away from God?  If it ever opens the door?  These spirits are coming back.  These ancient spirits or principalities are going to come back to our culture, to the West and to America, and they are going to come back to repossess it.  They will repossess America.  If you want to understand what is happening to America, it is this.”

Cahn gives several mind-blowing examples of the evil spirits “repossessing” America.  Evil is in every aspect of life, and it starts in the schools, to the child sacrifice of abortion.  Cahn says, “Evil always goes after the children.”

The evil spirits are helping people to “self-destruct,” according to Cahn.  How do we stop this?

Cahn says, “The only thing that can save America is turning back to God.  The only thing that can save America is revival.  It doesn’t look likely, but God is not what looks likely.  He is into surprises.  People did not expect Donald Trump to be President.  That was a surprise.  The day I finished the book, “The Return of the Gods,” was June 24th.  That was the day the Supreme Court overturned Roe v. Wade. . . . So, there is hope.  As long as there is God, there is hope. . . . The question is what are we going to do about it?  Are we going to be timid and let them cancel us out?  Or, are we going to be bold and spread the word like the apostles did in the first century? That is what drove the gods (aka evil spirits) out.  So, in many ways, it’s a big ‘If.’ God says, ‘If my people. . .’ that’s where this is.”

Join Greg Hunter as he goes One-on-One with best-selling author Jonathan Cahn to talk about his upcoming book, “The Return of the Gods,” for 8.26.22. 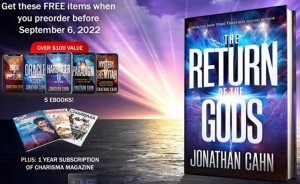 If you would like to pre-order Jonathan Cahn’s new book, “The Return of the Gods,” click here.

If you want to see the two-minute trailer for the book, click here.