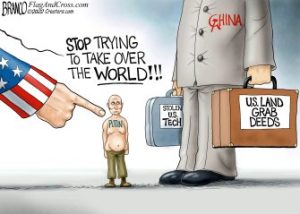 It looks like consumers are going to have to pay more at the pump after Saudi Arabia announced a 2-million barrel per day cut in oil production.  The Russians asked the Saudi Royal Family for the cuts to stabilize prices and even make them go back up.  Why are the Saudis doing what Russia asks in oil production?  You might remember, in August of 2021, the Russians signed a military cooperation deal with the Kingdom, and that means they are allies.  The White House is furious because oil is going right back up just as the 2022 midterms have Democrats worried about losing the House and the Senate because of high inflation.  Oil prices backing off in the last few months was a bright spot, but not any longer because of the new supply cuts.

Meanwhile, the dollar keeps soaring while the Fed keeps raising interest rates.  For the first time ever, the UN is telling the Federal Reserve to stop raising interest rates to fight inflation.  The rest of the world is buckling under the strong dollar.  The UN wants price controls instead, and every economist out there knows price controls do not work.  On top of that, it will only make the supply lines worse, which will in turn make inflation worse.  It’s a catch 22 with no good answers.  Get ready for sparse supplies in many things and higher prices too.

The CDC was caught hiding negative data on CV19 injections for nearly two years.  The CDC signed up 10 million people for a CV19 vax tracking app called “V-safe.”  The data showed lots of vax problems, and the CDC hid it from the public.  Two lawsuits finally pried the data loose, and it showed the vaccine was not safe and caused injuries right from the beginning that required medical attention.  It also caused 24% of people to not be able to work or go to school.  It’s yet another back eye for the CDC for covering up how deadly and debilitating the CV19 vax was from the very beginning.  The shots should have been stopped more than a year ago–but they keep on injecting.

There is much more in the 35-minute newscast.

Join Greg Hunter of USAWatchdog.com as he talks about these stories and more in the Weekly News Wrap-Up for 10.07.22.

Money manager Peter Schiff will be back to update us on the dire situation the Federal Reserve finds itself in with rate hikes and the failing economy.