Home
»
Market Analysis
»
Recession Not Over, Double-Dip or Worse Coming 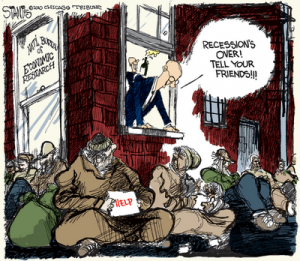 Just last week, I ridiculed a group of academic economists for calling an end to the longest recession since World War II.   The National Bureau of Economic Research proclaimed the recession we STILL find ourselves in ended in June of 2009.  The NBER is the official arbiter of the timing of the U.S. business cycle.  Well, I’m not the only person who thinks the NBER’s ascertainment of the economy defies all statistical evidence.

In his most recent report (it came out yesterday), economist John Williams of shadowstats.com says, “The official call of the recession’s end does not in any way alter the economic outlook, either as to existing underlying business activity or as to the course of likely future economic activity; only the nomenclature that will be used in describing current activity has been changed.  The re-intensifying economic downturn — already underway — simply will be called the second-dip of a double-dip recession, at such time as the NBER gets around to recognizing the “new” contraction in economic activity.”

To me, this economy looks like one great big dip.  Here is what the spinmeisters at NBER said when they announced the recession was over, “The committee did not conclude that economic conditions since that month have been favorable or that the economy has returned to operating at normal capacity. Rather, the committee determined only that the recession ended and a recovery began in that month.”   I wrote about this last week in a post I called “The Recession is Over? Really!”    If you read the statement closely, NBER simply said the recession was over without any facts to back it up.  I don’t know if this announcement was politically motivated because midterm elections are just 5 weeks away. I do know the facts say just the opposite– the recession is alive and getting worse.  Housing sales are bottom bouncing, car sales are plunging and banks are going under unabated.  The Fed is so freaked out, word is Bernanke and company has set the table for another trillion dollars of Quantitative Easing (QE) or money printing to buy U.S. debt.  These are not the signs of a healthy growing economy.

The folks at ZeroHedge.com are also a little freaked out at what the Fed is planning on doing and have written a very good analysis about what is coming called “Why QE2 + QE Lite Mean The Fed Will Purchase Almost $3 Trillion In Treasurys And Set The Stage For The Monetary Endgame.”  Writer Tyler Durden says, “We were stunned to realize that over the next 6 months the Fed may be the net buyer of nearly $3 trillion in Treasurys, an action which will likely set off a chain of events which could result in rates dropping all the way to zero, stocks surging, and gold (and other precious metals) going from current price levels to well in the 5 digit range.”

Don’t think we can print our way to out of this mess to prosperity.  Durden goes on to say, “. . . stocks will benefit from QE2, as will Bonds and as will commodities. In fact, every asset class will explode in a supernova of endless liquidity. To be sure, all of this will be very short lived. Very soon, all those assets denominated in fiat paper, will promptly collapse in the great black hole of reserve currency devaluation, as it becomes clear that the Fed will stop at nothing to win the race of global currency debasement.”  (Click here for the complete Zero Hedge Post.)

According to Williams, all the recent data on things such as housing starts, new home sales and orders for durable goods are “suggestive of a quarterly contraction for the current quarter (third-quarter 2010.)  Williams goes on to say, “. . . today’s ongoing “recovery” is not evident in most economic data, and, like the mid-Great Depression recovery, most people will not recognize the “good times.”  Main Street U.S.A. usually has a pretty good sense of what is happening in the real world, and the pain of today’s pocketbook issues still will be felt heavily at the polls, irrespective of any happy announcements or heavy political hype to the contrary.”

So, in my book, it’s “official” the recession is definitely NOT over, and it won’t be for a very long time.