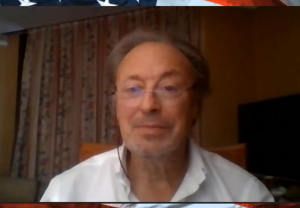 Renowned geopolitical and financial cycle expert Charles Nenner made a huge call at the end of January 2020.  Nenner said, “I am more worried about the market going down 40% than making 5% more on the upside.”  The market topped a few weeks later (2% higher) and then plunged 38% for the next several weeks.  Spot on call.  Nenner also said he was “more worried about domestic civil unrest than war in a foreign land.”  We had Antifa and BLM rioting, looting and burning in Portland, Minneapolis, Chicago, New York and many other cities for most of 2020.  This was, yet, another spot on call.  What’s Nenner seeing now?  Nenner says, “ I have a chart going back to the 1900’s, and if you connect all the tops, the tops of 1929, top in the 1960’s, 1987, . . . we are up to the trend line again.  It seems very, very unusual to break a trend line that dates back for 100 years.  So, risk is very high. . . .We are totally out of the market. . . .We have been out for three or four weeks. . . .We have the same thing as before.  People are more afraid to miss 4% on the upside than 50% on the downside.  That’s human nature.”

The next big call is on inflation.  The Federal Reserve keeps telling the markets that inflation is “transitory.”  Nenner contends inflation is here and will get much worse.  Nenner explains, “If the Fed keeps the policy unchanged, the market is not going to like it because they think the Fed is not paying enough attention.  For the moment, I agree with the Fed that the inflation fear is overdone.  But based on my cycles, we are going to soon start a whole new cycle of inflation. . . . There is a long term cycle on inflation. . . .In a year or so, we are going to have a lot of inflation.”

Nenner says Bitcoin, at least for now, looks to be topped out.  Nenner says, “I have no higher price target.  We might have a new up cycle, but I don’t think the top ($64,000) is going to be taken out for a long time.”

On oil and natural gas, Nenner says, “We are out of oil right now, but I don’t think the bull market in oil is over yet.  I think natural gas will start a long term up move soon.”

On gold and silver, Nenner says, “There is no bottom fishing in silver or gold.  The bottom is weeks away. We might touch the bottom on gold at $1,670.”

Longer term, Nenner still thinks gold will go past $2,500 an ounce, and silver will go up with it.

On the geopolitical front, Nenner says, “Everybody does whatever they want because nobody trusts the government.  You don’t know where the danger is coming from, first from the left or the right.  I think the left is more dangerous than the right. . . . I see things deteriorating very fast because nobody knows what’s right of wrong anymore in the United States.  It’s very worrisome.  I think the world will take the United States on because they have no clue what they are doing anymore.  This looks the same as before the Japanese attacked Pearl Harbor because how stupid can you get.  In the end, the United States will get its act together, but first, they have to be hurt very seriously.”

Nenner added a warning about “fake news” issued by Wall Street.  Nenner says, “Wall Street wants small investors on the wrong side of the market.  They accomplish this by giving out fake news.  They have to sell to somebody.  Don’t fall for it.”

There is free information and analysis on CharlesNenner.com.  You can also sign up to be a subscriber for Nenner’s cutting edge cycle work with a free trial period by clicking here.