If you look around the world for the countries with the most geopolitical risk, what comes to mind?  Plenty of people would say places such as North Korea, Iraq and Afghanistan.  There is no question these nations are trouble spots for the U.S. and the world, but they pale in comparison to the one eyed jack and the joker of  wild card countries.  The two hot spots that could destroy the fragile world economy, if they destabilize, are the Taliban/Pakistan conflict and the Iran/Israel powder keg over alleged nuclear weapons.

Let’s start with the Taliban/Pakistan conflict.  I love the cliche’ “a picture is worth a thousand words,” and the one below, from The Long War Journal, screams trouble!  Take a minute and look how much of the northern part of the country is firmly under control of the pro west government. The government is only in control of  the areas in green. Those are around the Pakistani capitol of Islamabad. 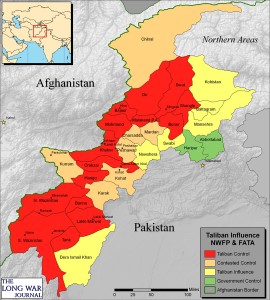 That simply is not a lot of real estate between the Taliban and the central government.  The big fear for the world is Pakistan’s nuclear arsenal. The government says their nuclear security compares with “the best in the world.”  When it comes to a missile attack by terrorists, India is probably the biggest target because it is the biggest foe. New Deli is within easy striking distance if the Taliban gains control of Pakistan’s nuclear weapons.   Pakistani missiles would have a harder time causing damage to the rest of the Middle East because, in most,  cases they have a top range of about a1000 miles.  Experts say the biggest problem with Pakistan’s nuclear arsenal comes from something like a suitcase bomb.  If the Taliban could get control of one, it would be relatively easy to transport to a precise location and detonate it. What would happen if the Taliban suddenly took control of Islamabad and the nuclear arsenal was up for grabs?  Would U.S. Special Forces go in to secure the nuclear weapons?  Would there be an air strike from the U.S. or a preemptive strike by India?  The idea of even a partial Taliban takeover in Pakistan would be dire, to say the least.

Then, there is the second and probably biggest wild card of them all, the Israeli opposition to Iran’s nuclear ambitions.  The U.S. wants the Iranians to freeze its nuclear projects.  Iran says it will not yield to pressure and is continuing with its nuclear ambitions.  Iran claims its reactors are for peaceful uses.   Israel claims a nuclear Iran is “catastrophic” for their tiny nation. When the Prime Minister of Israel, Benjamin Netanyahu, was asked this week if he was convinced that Iran wanted a nuclear weapon, he said unabashedly, ”Yes I am.”

That leaves Israel in a tight spot and has signaled a strike could come before the end of the year.  Former Israeli Deputy Defense Minister Ephraim Sneh told Reuters recently, “We cannot live under the shadow of an Iran with nuclear weapon.” Mr. Sneh went on to say, “By the end of the year, if there is no agreement on crippling sanctions aimed at this regime, we will have no choice.” That sounds a lot like a deadline to me.  Remember, the Israelis have a habit of surprise attacks on nuclear assets.  The Israeli Air Force was successful in bombing Iraq in 1981 and did it again in Syria in 2007.

Meanwhile, it has been reported that Iran is trying to purchase the sophisticated S-300 missile defense system from Russia.  Experts say if Iran had that air defense system in place, it would make it very difficult for the Israelis to pull off a successful air strike on Iranian nuclear sites.

So, it appears that Israel will not wait much longer for sanctions and will strike before Iran beefs up its air defense systems.  It is looking more and more like it is a matter of when, not if, Israel will strike Iran.  If an air strike happens, it would be catastrophic to the world economy. 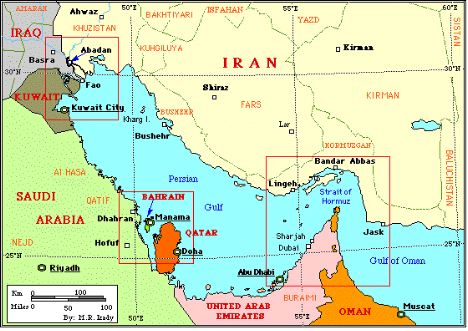 For one thing, the Straits of Hormuz would be almost immediately shut down by war.  It is only 30 miles wide at its narrowest point.  Oil supplies to the world would be greatly restricted.  The global economy would go into a tailspin in short order.  Oil prices would spike!  Who knows, maybe a barrel of crude could double in a week!  There would be open season on all U.S. interests in the Persian Gulf.  Iran would attack everything from oil tankers to the U.S. Navy.   China would certainly weigh in, as would Russia.  The conflict would not end quickly and there will be blood.

Things could get worked out and a peaceful solution reached.  Then again, keep in mind that there is a very real possibility of  an attack against Iran.  You should put your hard earned assets in a defensive position in case the worst happens.  Likewise, you should also consider the Taliban/Pakistan conflict with a conservative stance.  With the fragile world economy still on life support, it would not take much for a financial meltdown to occur if either one of these “wild cards” flip out of control.