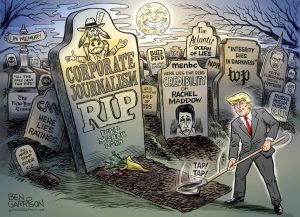 Now that the Trump “witch hunt” called the Mueller investigation is over, Trump goes on the attack. There was No collusion with the Russians and No obstruction. Now, look for the Trump Administration to strike back. This was a made up crime, and the people who invented this fairy tale should be prosecuted for treason and sedition. Many on the left cannot let go, even though their own legal experts say “it’s over.”

During the last two years, the mainstream media (MSM) continued to perpetuate this outright lie, and anyone who did not come on and continue the lie was dismissed. Famed lawyer Alan Dershowitz said he was “banned” from CNN because he would not participate in the smearing of President Trump with the Russia collusion hoax. Now, the MSM ratings are imploding with little chance of recovery.

Dr. Dave Janda from Operation Freedom will be the guest for the Early Sunday Release. He’s going to talk about Trump striking back at the Deep State that tried to frame him.