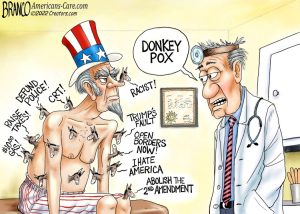 The USA is rushing to spend more money on weapons to send to Ukraine for more war. They are sending drones, hellfire missiles and $700 million more to kill Russians if the money ever even makes it there.  The USA is also cutting Russia off from the payment system and will force them into default.  What will Russia do to counter this dirty trick?  That is the big question, but big bankers like Jamie Dimon says JPMorgan Bank is bracing for a “hurricane.”  Is this announcement just a coincidence?

More “mysterious” deaths happened this past week where celebrities died, and there is no cause of death listed.  What is going on?  Why this sudden reporting flaw where it is not reported when someone like a 19-year-old star lacrosse player dies and everybody is mum on the cause? Could this be more death caused by the CV19 experimental injections they try to pass off as some sort of vaccine when it is a fact it does not stop Covid infections?  Are there going to be many more mysterious deaths in the future?  The answer to both questions, I think, is decidedly–yes.

There has been one record high price in fuel after another, and this week was no exception.  The record national average for regular gasoline is now $4.71 a gallon.  Will the record hold?  Not a chance, and this is very bad news for “We the People.”  With rising fuel prices and rising prices in general, the forecast is clearly more inflation, much more.

Join Greg Hunter as he talks about these stories and more in the Weekly News Wrap-Up for6.3.22.

Renowned pathologist Dr. Ryan Cole will be the guest for the Saturday Night Post.  He will bring forth more stunning information about the sickening and deadly effects of the CV19 so-called “vaccinations.”